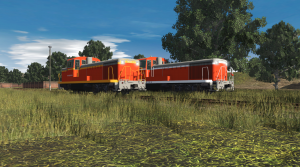 The Akita Rinkai Railway currently owns three DE10 diesel locomotives, all actually ex-DE15s converted to DE10 standards. Two of them are ex-JR East locomotives, while the third was actually purchased “third-hand” from the Tokachi Railway in Hokkaido upon it’s closure in 2012, wich itself had been purchased from JR East in 2004. All three DE10s are currently in regular service, painted in the JNR-era standard diesel locomotive livery.

Currently, with the railway’s closure looming, the Akita Rinkai Railway is selling off most of it’s rolling stock. The Sendai Rinkai Railway has already set forth to acquire one of the DE10 units.