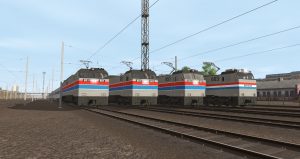 By the early 1970s, the newly-formed Amtrak was facing several issues with it’s rolling stock, wich it had inherited from several different railroads. While the situation was famously dire on diesel-hauled long-distance services, the electrified North-East Corridor was also affected as well.

There, services were mainly split between the venerable Pennsylvania Railroad GG1s, wich, while reliable and robust, were nearing 40 years of age, and by the early 1970s were also absurdly obsolete; and the brand-new and very modern Budd Metroliner electric multiple units, wich however, suffered from serious reliability problems. Furthemore, due to decades of lacklustre maintainance, the trackage on the NEC was in a precarious situation, leading to the FRA (the Federal Railroad Administration) imposing an 85mph (137 Km/h) speed restriction to the extremely heavy (475000 lbs or 215 tons) GG1s to avoid worsening the tracks’ conditions and thus possible derailments. In this regard, the GG1’s rigid 2-C-C-2 wheel arrangment didn’t help either.

As such, Amtrak urgently needed a new passenger electric locomotive. Original plans to import and adapt an european design were quickly shelved, as this would need alteast three years, and with GG1s quite literally falling into pieces, the introduction of a new locomotive could not be delayed, thus Amtrak turned to General Electric, wich at the time was one of the very few remaining domestic electric locomotive manufacturers, for it’s E60 design.

The E60s had originally been designed for the Black Mesa and Lake Powell Railroad (BM&LP), wich was an unique 78 miles (125 Km) long industrial railroad in Arizona, electrified at 50Kv 60Hz AC and completely isolated from the national railroad network, working as a conveyor belt hauling coal from a mine to a power plant. To operate services on this line, GE had built six E60C six-axle single-ended electric locomotives, each with a power of 6000hp (hence the “E60” name, where E stands for “Electric” and “60” is 6000hp) and a maximium speed of 72mph (112 Km/h), altough services on the BM&LP were limited to 35mph (56Km/h).

However, many of the “technical” components were left the same, including the bogeys and the traction equipment, wich comprised a series of thyristor rectifiers and an automatic-switching resistor control derived from the one already widely used on GE’s diesel-electric locomotives.

With the design finalized, in 1973 Amtrak placed an order for twenty-six E60 locomotives, with 15 of these designed as “E60CPs” and fitted with steam-heating equipment for services using the old “inherited” passenger stock, and the remaining 11 designed as “E60CHs” and fitted with head-end power for services using the brand-new Amfleet passenger cars.

However, with Amtrak managing to expedite the Amfleet deliveries from the Budd company, nine out of the 15 E60CPs were modified “during manufacturing”, to become E60CHs, leading to a redesigned order of 6 E60CPs and 20 E60CHs.

The first E60s finally entered in service in November 1974, being used primarily on express trains to and from New York, such as the Clocker service from New York to Philadelphia.

Between the late 1970s and the early 1980s, some E60s were retrofitted with protective grids over the front cab windows, to avoid damage or even injuries coming from thrown stones by local hoodlums. Nicknamed “ghetto grills” or, in a tale of dry railwaymen humor, “brick filters”, these protections were later removed as stone-throwing incidents became rare by the mid-80s.

However, problems soon developed, as E60s were found to have a tendency to harshly sway left and right at speeds higher than 100mph (160 Km/h), an issue that was mainly caused by the six-axle bogey design, more suited to freight services rather than high-speed passenger ones, something further exacerbated by the weight of the locomotives, wich, depsite all the “lightening” efforts made in comparison to the original E60Cs, was still excessive. Thus, after a serious derailment on the 24th of February 1974, the FRA imposed a 90mph (145Km/h) speed restriction on the E60s.

In 1976 Amtrak officials pubblicly staded that the company would attempt to increase the maximium allowed speed of the E60s to 110mph (176 Km/h), but nothing came out of this. Also in 1976, Amtrak finally decided to proceed with the original “european locomotive” plan it had devised in the early ’70s, before the purchase of the E60s.

That year, Amtrak leased a French CC21000 class locomotive (unit no.3 built by Alsthom) from the SNCF and a Swedish RC4 class locomotive (unit 1166 built by ASEA) from the SJ wich at the time were two of the most advanced european locomotives in service, and brought them to the united states where they would be evauled and tested. Classified X996 and X995 respectively, both locomotives performed well, but ultimately the Swedish RC4 resulted superior (mostly due to the substandard track condition of the NEC, wich took a toll on the CC21000 locomotive suspensions), resulting in Amtrak ordering 30 units (later increased to 54) of a license-produced version of the RC4, manufactured by EMD with ASEA electrical equipment, classified “AEM-7s”.

AEM-7s entered revenue service in May 1980, replacing the GG1s (wich were retired by April 1980) and displacing both the Metroliner EMUs and the E60s to slower, less important services. With the new locomotives proving themselves superbly reliable, many E60s became surplus for Amtrak’s requirements and were subsequently withdrawn.

In 1983 two surplus E60 units were sold to the Navajo Mine Railroad (an isolated industrial railroad similar to the BM&LP) and in 1984, thanks to a grant of the Urban Mass Transit Administration, New Jersey Transit was able to purchase 10 units to replace it’s dilapidated GG1s, wich were still in service on the North Jersey Coast Line.

The remaining 14 units still in Amtrak’s roster were extensively overhauled and refurbished between 1986 and 1988. Modifications included the removal of steam equipment and it’s replacement with HEP equipment from the last remaining E60CPs and few bodyshell modifications (namely the headlights and numberboards were moved to the top of the locomotive’s front). All the overhauled locomotives were reclassified as “E60MA”s, regeared for a maximium speed of 90mph (145Km/h), renumbered from the 9XX range to the 6XX range and repainted in Amtrak’s new Phase III Livery.

E60MAs were returned to service hauling heavy long-distance trains on the NEC, including the Crescent, Silver Service and Montrealer. Thanks to the removal of steam heating equipment, E60MAs were now 11 tons lighter than before, making for a more stable, and in turn, safer, comfortable and more efficient locomotive.

Howevver, the introduction of the Acela Express High-Speed trains in 2000 cut short the E60MAs’ career as AEM-7s began to be displaced from the “top express” serives on the NEC and cascaded to slower, less important services, where they began to ultimately replace the E60s, wich were all retired by 2003.

Unit 603 was acquired by the Pennsylvania Railroad Museum in 2004, where it sits on display to this day.