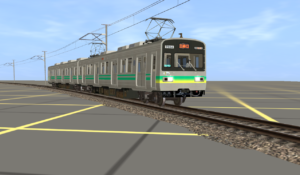 An unsung career with an unexpected epilogue.

Around 2010, the Chichibu Railway in Saitama Prefecture ran most of it’s services with ex-JNR 101 Series trains of 1957, wich after more than 50 years of hard work, were now almost crumbling. A solution was urgently needed, and the Oimachi Line surplus cars were one.

Chichibu Railway bought as much cars as it needed: seven 3-car sets classified as the “7800 Series” (derived from former 8090 Series sets, both with high and low headlights), wich entered service in 2010; plus four 2-car sets classified as the “7800 Series”, wich were converted from 8090 Series intermediate motor cars and entered service in 2013. These were all former Oimachi Line cars, and they retained their distinctive “gradation” head band, altough with light green instead of red.