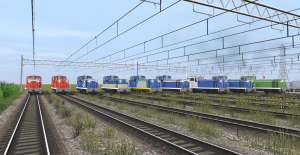 By the early ’70s, the “smokelessness” program of JNR (the complete replacement of steam traction with diesel and electric locomotives) was nearing completion: steam locomotives had already been completely replaced on the mainlines by electric locomotives, on the branchlines by the DD13s and DE10s, and in the marshalling yards as well, courtesy of the specially-designed DE11s. However, there was one last spot remaining where steam locomotives were still in full, unscratched, service: those lines, “branchlines of branchlines”, that had an axle-load limit even lower than the one of lines wich the DE10s had been painstakingly designed for. As such, on these lines JNR still had to resort to the already well anachronistic use of steam locomotives, specifically the last remaining units of the C12 and C56 classes, most of wich were already well over 40 years old. With all existing diesel locomotives designs unsuitable for the task, JNR eded up having to design a completely new one.

The new locomotive was intended from the start to be as much similar to the well-proven DE10s as possible, reusing the engine, bogeys, transmission and cab layout, as a matter to contain costs, make the designing process quicker and also to appease the all-powerful JNR unions, wich had always been quite reticent towards the introduction of new designs, as the workload of railwaymen increases with the entrance in service of evry new different type of locomotive or multiple unit (and this is also one of the main reasons why JNR had always tended towards somewheat of an “overstandardization” of it’s designs).

Under the guide of Yukitaka Ishii, one of JNR’s leading diesel multiple units designer (wich would later become JR Kyushu’s first president), the design team opted for the easiest way: taking the bodyshell design of a DE10 and “squashing” it to their needs.
The first modification made was to get rid of the steam boiler for passenger car heating, wich would’ve been useless as these new locomotives were intended for freight service only (as a matter of fact, by then, steam locomotives were indeed used only on freight services: steam-hauled passenger trains had already been replaced by DMUs long before).
With the boiler gone, the locomotive’s bodyshell could be considerably shortened (a plus for shunting services and for running on tight curves).
The new short bodyshell however meant the abandonment of the DE10’s distinctive trait, the asymmetrical C-B wheel arrangment, wich was replaced by a far more conventional B-B arrangment, using two DT131H-type bogeys, wich were a lightened version of the DE10’s “rear” two-axle bogeys.

Finally, the V12 DML61S-type motor and the hydraulic transmission remained roughly the same as the ones in use on the DD51s and in the DE10s, only with the motor output power lowered from 1000 to 800ps, while the transmission was “geared down”, resulting in a maximium speed of 75Km/h for the new locomotives (compared to 85Km/h for the DE10s).

In the end, the designing team ended up with an almost tiny 11,8m-long locomotive with a total weight of 48 tons (an extremely light 12 tons per axle), wich compared to a standard DE10 was a full 2.7m shorter and full ton-per-axle lighter!

With the design finalized, production of the new locomotives, now classified as “DD16s” began in 1971, with the order split between Kawasaki Heavy Industries and Nippon Sharyo. JNR’s Nagano works participated in the manufacturing process as well, building the first two units. In the end, a total of 65 DD16s was manufactued between 1971 and 1975.
Between 1979 and 1983, four DD16 units (2, 5, 4 and 13) were reclassified as “DD16-300s” and converted for snow-plough hauling, being fitted with snowplough cars derived from the ones of the DE15s, for snow-clearing services on the Oito and Iiyama Lines.

The first DD16s began services in 1971, as soon as they had been completed, replacing the remaining steam locomotives on branchline freight services. JNR’s long-awaited “smokelessness” finally came in 1976, when all remaining steam locomotives still used for shunting duties were withdrawn (mainline steam services had already ended one year earlier). However, the “glory” of the DD16s was short lived: with the decrease in freight traffic on branchlines, most of the yet brand new locomotives became surplus for JNR’s requirement. The situation worsened starting from 1984, when JNR began handing-over most of it’s unprofitable branchlines to newly formed thrid-sector railway companies, further restricting the usage of it’s DD16s.

In the end, most DD16s were withdrawn and scrapped prematurely. Only 19 units “survived” the privatization of JNR and were inherited by the JR Group, being split as follows: 10 units for JR Hokkaido, 4 units for JR East, two units for JR Kyushu and three DD16-300 units for JR West.

With their “mainline” services practically no longer existing, the few DD16s inherited by the JR Group were repurposed for shunting within railway workshops, in particular JR Hokkaido’s Naebo works and JR East’s Omiya works.

JNR had already placed in service one DD16 unit (no.36) in service as an internal shunter for the Omiya works, wich was fitted in an all-over red livery. After the privatization, DD16-36 was joined by DD16-20, with the two serving togheter as the Omiya works’ shunters. Their livery was also frequently changed: DD16-20 had been seen wearing a blue, grey and white livery that followed the “pattern” as the JNR standard one (mirroring the blue livery of JR Freight’s refurbished diesel locomotives); a an all-over blue livery with white cabs and finally, an “Hokutosei”-like blue livery with golden lines. DD16-36 instead could be also seen in a livery essentially identical to the “Hokutosei”-like one of DD16-20 but with green instead of blue, this livery having been inspired by one of the short-lived “Dream Space” joyful train. However due to their age, both DD16s were later replaced in their duties by a pair of HTM270 tractors.

On JR Hokkaido’s side, the Naebo works used two DD16s as well, units DD16-26 and DD16-44. The first one was fitted in an all-over blue livery with a large “JR” logo on the sides of the “long hood” and a star on the sides of the cab (the star, or better the polar star is one of the symbols of Hokkaido), while DD16-44 was fitted in a white and blue livery with a yellow line. The two were later joined by DD16-48 wich was repainted in the “HET” (“Hokkaido Express Train”) livery of the KiHa 281 and 283 that the locomotive often had to move within the works. All three DD16s were later replaced by a single DE10, unit 1741 moved from Asashikawa depot (wich was also repainted in the same “HET”-like livery as DD16-48), as the naebo works’ internal shunters.
The two JR Kyushu units were used as “works shunters” as well, running within the company’s Kokura Works, but without any “special” liveries – both kept their standard JNR-era livery until their retirement. Finally, JR West’s three DD16-300 units remained in service as snowplough locomotives until their replacement with more modern “self-contained” snowplough units.

As of today, only one DD16 unit remains operable: DD16-11, wich is owned by JR East. It’s usage is very sparce, as it is intended to haul special trains on non-electrified lines.