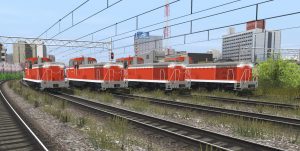 The locomotive that eventually became the DE10 was concieved in the early 1960s, with the JNR being looking for a replacement for steam locomotives on lines that did not allow for high axle loads. The yet-unnamed locomotive was intended to act as a “road-swithcer” type of locomotive (in short, a heavy shunting locomotive being able to run mainline duties as well, both freight and passenger).

The concept for the new locomotive was based on the one of the already-in-service and well-proven DD13, wich however suffered from some shortfalls; namely the high axle load (14 tons / axle) and the fact that it was lacking a passenger carriage heating boiler, wich made the DD13s a strictly freight-only locomotive.

The first serious designing and research for a new “road-swithcer” locomotive began in 1962, when the first DD51s entered service. The main “diktat” for the designers was to have as much components and equipment in common with the DD51s as possible, as a matter of containing both manufacturing and maintainance costs. Specifically, the new locomotives were set to use the same engine, the V12, DML61-type.

Two prototypes with a B-B wheel arrangment, classified DD20-1 and DD20-2 were put in service in 1963 and 1965 respectively; these were a “squashed-up”, half-the-lenght version of a DD51. DD20-1 had a unique “full-back” cab with only the “long hood” (an arrangment similar to the DD14 diesel locomotives, but with “front” and “rear” reversed), while DD20-2 had a more conventional off-centered cab with both a “long” and “short hood”.
Both DD20s however started to suffer from several design flaws, wich caused among other things, a strong tendency for wheelslip. Furthemore, their axle load was still too high for JNR’s needs: 13,5t per axle, a mere 500kg less than the DD13s.

In 1966, the DD20 project was extensively rewiewed and modified, with one fundamental change being made: to finally address the axle load problem, given that the locomotive couldn’t have been made lighter, JNR’s designers made the audacious and unusual choice to add another axle to the front bogey, resulting in a locomotive with the very unusual “C-B” wheel arrangment. The choice was “audacious” as asymmetrical wheel arrangments are generally frowned upon by railway designers as they may have a tendency for unstability and uneven “directional performance” (e.g. “works well in one direction but not as well in the other”).

However, thanks to a carefully-tought internal weight distribution, instability problems were resolved beforehand, and with the extra axle avabile, the axle load of the new locomotives was finally brought under 13 tons (the objective of JNR), even if “by themselves” the new locomotives were even heavier than DD13s (65t vs 56t).

As the DE10s were designed primarily for shunting work, the driving desk was unusually placed parallel to the tracks, rather than perpendicular, allowing the driver to see from both heads of the locomotive while remaining seated at the same place (a disposition similar to the one used on most american road switchers at the time, such as the EMD GP9 or the SD-40).

Production of the DE10s started in 1966, with the new locomotives being manufactured by Nippon Sharyo, Kisha Seizo, Hitachi and Kawasaki Heavy Industries, and ended in 1978, twelve years later, with a staggering total of 708 units having been manufactured. Two fundamental versions of the DE10 were manufactured: the standard “warm region” version for services in the Kanto, Chubu, Kansai, Kyushu and Shikoku areas, and a “cold region” verison equipped with distinctive circular “clear-wiew” screens (derived from Merchant Marine practice) for services in Hokkaido, Tohoku, Niigata and Hokuriku areas.

Furthemore, the DE10s were divided in several subseries: the -0 subseries (158 units) was formed of “standard” units with passenger car heating equipment, the 74 units in the -500 subseries had their heating boiler removed and replaced by a concrete ballast to even-out the weight, the -900 subseries was a single unit that was weighted down even more (and would form the basis for the DE11 built from 1968 onwards), the 210 units in the -1000 subseries used an improved bogey and motor design (while keeping the heating boiler) while the -1500 subseries was essentially the same as the -1000 subseries but without the heating boiler (again, weighted down by a concrete ballast). Finally, the -3000 and -3500 subserieses came to be in 2009 when JR Freight bought 14 surplus DE15s from JR East and converted them back to DE10 standards.

During JNR service, thanks to their versatility, DE10s hauled almost any type of non-multiple-unit train, from light to medium freight services on both branchlines and mainlines to regional passenger trains (usually formed of 50 Series coaches), marshalling yard shunting, maintainance work and empty stock hauling, being a common sight on almost all non-electrified railway lines in Japan, from Hokkaido to Kyushu.

Owning to their success, DE10s spawned several derivatives, such as the DE11 heavy diesel-shunters (derived from the DE10-901 prototype) built between 1968 and 1979, the DE15 locomotives designed for snowplough service built between 1967 and 1981, the DD16 B-B small shunting locomotives (a shortened and lightened version of the DE10 for lines with the even lower 12t axle load) built between 1971 and 1975, and finally, the DE50 prototype from 1970, basically a DE10 “on steroids” for heavy mainline services, wich however proved unuccessful and (unlike the other three derivatives) did not see mass production.

The remaining others were acquired by the “JNR Settlement Corporation” (JNRSC), an interim company tasked to phisically split JNR into the six JR companies, reassing line and stock ownership and sell off surplus stuff in an attempt to quell the soaring JNR debt. Part of the locomotives owned by the JNRSC was bought by several third-sector and industrial railways, but most remained without a buyer and were subsequently scrapped or sold as spare-parts donors.
The massive surplus of almost 400 DE10s was caused mainly by the abandonment of most marhsalling yards, where the locomotives were used on shunting duties, in favour of the relentless “containerisation” of railway freight services, wich did not require such yards.