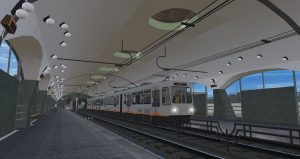 All the necessary dependencies are included in the pack or are avaible on the DLS.

Originally, the project for what would later become today’s subway in Genova were centered around a simple “tram shuttle” connecting Brin and Canepari to Principe Station, through the Certosa tunnel.

This tunnel was built between 1905 and 1908 for lines 9, 10 and 11 of the former Genova tram network, which connected the city center with Val Polcevara.
With the definitive closure of the traditional tram network in 1966, the Certosa tunnel was paved, equipped with a complex forced ventilation mechanism and converted to road use, but for urban service buses only, starting on the 1st of October 1967.

Its new use was never easy: due to the narrowness of the tunnel, two-way traffic was not possible, which forced the buses to proceed one-way alternating in groups of two, three or even four vehicles with maximum frequencies of 10 minutes each direction.
Moreover, the intense traffic and the ineffectiveness of the ventilation made the air inside the tunnel practically unbearable, saturated by exhaust gases – there were so many complaints that in 1978 the municipal government, dusting off some old ideas, presented a project for a 3800m-long “protected mini-tramway” connecting Canepari and Principe, reusing for the most part the Certosa tunnel.

The choice of rolling stock for the new route fell on what at the time was one of the most modern tram vehicles in service, the Be 4/6 of the VBZ in Zurich, nicknamed “Tram 2000”: a two-section, three bogeys articulated tram with built starting from 1976 by SIG with mechanical components from Schindler and Schlieren and electrical components from ABB and BBC.

The municipality of Genova planned to use an almost identical version produced under license by OMS (Officine Meccaniche Stanga), with the manufacturer prompltly presenting a mockup.
Unfortunately, due to some pitfalls concerning traffic signal priority on the few short sections shared with road traffic, the project was prematurely shelved.

In 1981, finally, people began to talk seriously about the subway: Genova was in fact included in the list of cities in which the national government recognized the construction of a subway as essential to overcome the increasing traffic problems.

Ansaldo Trasporti was commissioned to draw up a new project, absorbing the original 1978 one, but with numerous changes: in particular, it went from a “tramway in a protected location” to a light metro inspired by the successful wave of the stadtbahns then already widespread in West Germany.
The planned route was moreover extended: now being a proper line, connecting Rivarolo to Brignole via the Certosa tunnel and the ancient port, instead of a simple shuttle.

As for the rolling stock, given that in the meantime OMS had already acquired the production licenses for the “Tram2000”, the design of the new trains remained anchored to their Swiss predecessors: the general arrangement of doors and windows and the same general dimensions (width and lenght) were maintained, while among the few changes made, the car floor was raised, going from a tramway-derived medium-low floor to a proper “platform height” floor. Furthemore, the front was resesigned, made wider and more comfortable for the driver compared to the original Swiss front.

As for the technical components, the new trains were to be powered by 750v DC overhead lines, with traction control via a modern GTO chopper. Finally, the maximum speed of these LRVs was set at 70Km/h, more than enough to meet the service requirements.

Construction of the first cars began in 1985 and the first, number 01, was completed in February of the same year and was promply shipped to Genova after a few test runs in the Precotto depot of Line 1 of the Milan subway.

In Genoa, unit 01 was used for further test runs on the first compelted section of the subway line, between Brin and Dinegro.

Initially the tests were essentially static, to verify the loading gauge, shortly afterwards, by means of a provisional electrical connection with the overhead line, the first dynamic test runs could also begin along the 1700m of track already laid. The remaining five LRVs (02-06) were completed in the summer of 1985 and delivered shortly thereafter. Due to the relative slowness of the works and the early delivery of the trains, for a while the latters remained mostly unused, except for occasional test or demonstration runs.

Finally, on the 13th of June 1990, during the World Cup, the first section of the long-awaited Genova metro was inaugurated, with the entry into service of the 2.6km long Brin-Dinegro section, and of the six 0 Series units as well.

To date, all six are still in service, practically without having undergone any changes or modifications, except for the replacement of the tramway-style 4-section doors with plug doors, which took place between 2011 and 2012.

Having surpassed 30 years of age, AMT (the subway operator) does have plans to replace the three 0 Series formations (six trains coupled in 2-car formations) with an eventual additional order of the ugly Hitachi-Rail-built 30 Series, introduced in 2016. Plans are for the replacement to be carried out between 2023 and 2024, but hopefully these trains will last a few months more…

The LRVs were delivered so unexpectedly early that upon their arrival the catenary hadn’t even been placed yet, and for the test runs to happen, a provisional catenary  was installed in a hurry.

Originally, 69 additional units were to be delivered, bringing the total to 75 “0 Series” sets. This was later cancelled in favour of more modern trains, among those the superb 10 Series from 1991.