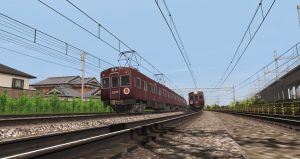 By the late 1950s Hankyu Railway was still relying on a majority of indaequate pre-war and substandard wartime and immediately-post-war-built stock, along a minority of more “modern” stock built in the mid-1950s that however had been built with old and nearly obsolete design concepts in mind, such as single-leaf passenger doors, and some (such as the 1200 Series) even used bogeys and traction equipment salvaged from withdrawn 600 and 920 Series trains dating from the late 1920s and early 1930s!

With ridership sharply increasing, a new train was badly needed, and as the rolling stock situation was quite dire on the entirety of Hankyu Railway’s lines, a “standard” new commuter train design for the entirety of the network seemed the most appropiate choice.

Jointly designed, the new 2000 and 2300 Serieses entered service in 1960, on the Kobe and Kyoto Lines respectively, with the 2100 Series for the Takarazuka Line following suit in 1961.

The “2X00” serieses trains were ground-breaking in many ways, being Hankyu railway’s first commuter rolling stock with double-leaf passenger doors, smooth, all-welded, lightweight steel bodyshells, wich meant a considerable “weight-saving” wich meant that an “all-motor-car” configuration was no longer needed to keep with the tight schedules, and in turn, it meant less wear-and-tear on the tracks and infrastructure, and most importantly, a considerable energy saving.
Depsite the appearances, the bodyshell design had actually been slightly simplified compared to the predecessors of the 2X00 serieses, wich again, meant another considerable saving of time and money when manufacturing a large amount of trains.

Besides ease and “inexpensiveness” of manufacture, passenger comfort was also one of Hankyu railway’s major concerns. The new trains were fitted with all-longitudinal seating with velvet-like olive-green upholstery and mahogany-like interior paneling. Passenger windows, retained inside an alluminium frame, were greatly enlarged and, as the trains weren’t fitted yet with air conditioning, could be fully opened to let fresh air in. Finally, instead of the more usual curtains, these trains used shutter-like window covers that the passenger could rise (as they moved from “bottom-up” rather than the more usual “top-down”).

The bogeys were also unusual, as Hankyu choose to import French-made Alstom and West-German-made Minden-Deutz bogeys for the new trains, with the latter proving superior to the former and being later built under license by Sumitomo Heavy Industries for the rest of the fleet. These bogeys, types FS-333 and FS-344, were equipped with a pneumatic suspension system, rather than the usual hard spring-type suspension, wich again increased passenger confort, and made Hankyu one of the first railways in Japan to adopt such suspension system.

But the most advanced fetaures of the 2X00 Serieses were neither in the bodyshell nor in the interior, but were rather in the traction control equipment, as the 2X00 Serieses were Hankyu railway’s first trains equipped with cardan-drive motors, regenerative and electromagnetic braking, but most importantly, they were fitted with an unique transistor-controlled camshaft resistor traction control system with automatic switching: in other words, if earlier trains only had 5 “fixed” notches (0, Shunt, Series, Series-Parallel, Parallel), with this system, the controller “positions” in the cab remained five, but the speed notches became 227, changing automatically by a servomotor. This resulted in an extremely smooth accelleration performance, something that would be equaled only more than a decade later, with the introduction of the chopper control system.
Lastly, this innovative control system also fetaured an unique “fixed-speed” setting, a sort of “cruise control” where the train (upon imput from the driver) would maintain a fixed speed of 50, 65, 80, 90, 100 or 105Km/h, a very useful fetaure when running express and rapid services.
Combining all these incredibly modern fetaures (in 1960!), the 2X00 Series were nicknamed the “auto-car” or “artificial-brain-train” by railwaymen and railfans alike.

While mostly identical, the 2000, 2100 and 2300 Series were designed with several minute differences between them, to better adapt to their respective lines:

The 2000 Series for the Kobe Line can be considered the “basic” version, with 1500v DC-only equipment, a 110Km/h maximium speed and 150Kw power with a 84:16 (5,25) gear ratio for “flat” lines. The 2300 Series for the Kyoto Line, introduced in the same year, is nearly identical to the 2000 Series, except that these were initially fitted with dual-voltage capability as they had to briefly run under the Takarazuka Line’s catenary, wich still used 600v DC, between Juso and Umeda stations. Dual-voltage equipment was later removed from the 2300 Series when the Takarazuka line’s catenary voltage was increased from 600v to 1500v DC in 1969.

The 2100 Series for the Takarazuka Line had the most differences from the equivalent 2000 and 2300 Serieses introduced a year earlier. Firstly, as mentioned earlier, the Takarazuka Line’s catenary voltage was still 600v DC (a renmant from the era when the line operated as a tramway), so the 2100 Series was fitted with 600v DC-only equipment, altough predisposed for a possible conversion to 1500v DC (wich eventually happened in 1969). Furhtemore, compared to the mostly flat and straight Kyoto and Kobe Lines, the Takarazuka Line had several steep slopes and tight curves, so the gearing of the 2100 Series was changed to a 6.07 Ratio, less adapt to high speeds but better for ascending slopes. The “fixed speed” settings were changed as well: instead of the “usual” 50, 65, 80, 90, 100 or 105Km/h of the 2000 and 2300 Serieses, the 2100 Series had 45, 60, 70 and 80Km/h speed settings.

Besides these three serieses, there was a fourth one, the “2021 Series” (wich is generally considered to be part of the 2000 Series). These trains, intended to supplement the 2100 Series on Takakrazuka Line services, were built to the Kobe Line 2000 Series’s standards but were also fitted with dual-voltage equipment. When the Takarazuka Line’s voltage was increased to 1500v DC, the 2021 Series’s dual voltage equipment was removed and the whole series was reclassified “2071 Series”.

Later, between 1962 and 1963, 3-car sets were introduced as well, with trains now being formed as 5, 6 or 7-car sets. Finally, when deliveries of the 2X00 Serieses ended, most of the trains in service on the “Main Lines” were formed in 6, 7 or 8-car sets, while the branchlines operated with 3 and 4-car sets (with most “unused” intermediate cab cars being converted to straight trailer cars with the removal of the cab and the control equipment).

Starting from 1977, air conditioning was retrofitted on the 2000 Series, with the 2300 Series following suit a year later.

By the late 1980s, the 2000 Series had severely deteriorated and as such a replacement was needed, coming under the form of the 8000 Series, wich had entered in service in 1988. “Mainline” 2000 Series services ended in the same year, with most of the fleet remaining on branch-line services until 1992, when they were replaced as well. Some surplus 2000 Series cars were however sandwiched into other serieses formations, managing to stay in service until 2014.

Soon after, the 2300 Series had been almost completely replaced as well by the brand-new 1300 Series, with the last of these iconic maroon-colored trains making it’s final run on the Kyoto Line on the 22nd March 2015.

Hanyku’s 2300 Series was the first train running in regular service on the Tokaido Shinkansen.

I’m not kidding. check this out.

The story goes that in the early 1960s, when JNR was building the Tokaido Shinkansen, Hankyu’s Kyoto Main Line was being disrupted by construction works.
In the end, a deal was made between the two companies: Hankyu Railway was allowed to use the newly-completed Tokaido Shinkansen section between Oyamazaki and Kanmaki stations while building it’s own, new “proper” Kyoto Line tracks, paralleling the Shinkansen.

The Shinkansen section was thus temporarily connected with Hankyu’s network and fed at 1500v DC. Provisional 4-aspect block signalling was also fitted on the line, and equally provisional stops with wooden platforms were erected, temporarily replacing the “permanent” Kanmaki, Minase and Oyamazaki Stations. This unique situation lasted for little longer than 8 months, between the 12th of May and the 19th of December 1963, when the new “proper” Kyoto Line trackage was completed.

At the same time, Hankyu Railway lent one of it’s 2300 Series – the brand-new 2-car set No.2371 – to JNR, wich used it to do further tests up and down the new Shinkansen Line, as JNR did not have any suitable 1435mm-gauge rolling stock. Set 2371 was returned to Hankyu Railway when the 1000 Series Shinkansen test trains arrived and “proper” Shinkansen testing could begin.