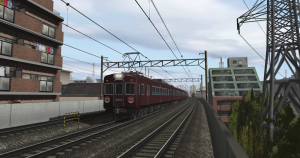 This is a Reskin. In order for this train to work, you’ll need to download and install first the original Hankyu 2800 Series made by Keimei and avaible on the DLS.

These were introduced in 1964, when Hankyu Railway decided to increase the frequency of Kyoto Line limited express services to a train evry 15 minutes. These were intended to standardize rolling stock on said Limited Express services, wich at the time were mainly run by the old 710 and 1300 Serieses, along with a minority of the recently-introduced 2300 Series trains, wich depsite being very modern, were all-longitudinal seating trains, making them quite not suited to the job.

The need for new limited express rolling stock became even more urgent in 1963, as the competing Keihan Railway had just introduced it’s brand-new 1900 Series limited express train, and with JNR planning to replace the dreaded old 80 Series with the equally-brand-new 113 Series on Tokaido Line rapid services, to avoid losing passengers, Hankyu Railway could not linger no longer.

Derived directly from the 2300 Series commuter train, the 2800 Series used the same exact bodyshell of the former, but with the central door removed, leaving a 2-door train. The interior was also obiviously changed, with longitudinal seating being changed with cross-seating in 2+2 formations. To better adapt to the new seating arrangments, the central passenger windows were changed as well – the width was doubled from the ones of the 2300 Series.

An initial batch of seven 2+3-car sets was manufactured by Hankyu Railway’s Naniwa Koki (soon after renamed “Alna Koki”) between 1964 and 1966, with the first 2800 Series trains entering in service on the Kyoto Line in mid-1964. With the increase in ridership of the Kyoto Line limited express services (following the timetable “speeding-up” of 1971, wich brought the travel time between Kyoto-Kawaramachi and Osaka-Umeda stations down to 38 minutes), all the 2800 Series trains were gradually lenghtened up to 8-car sets by 1973, with additional cars also manufactured by Naniwa Koki.

Unfortunately, these trains fell victim to their own success, as to compete with Hankyu Railway, in 1971 Keihan Railway introduced yet another limited express train, the famous “TV-train” 3000 Series, and one year later, JNR (wich in the Kansai Area has always been reagared as the “bottom feeder” railway) reorganized it’s express services to compete with the private railways, creating the Shin-Kaisoku services, operated with 153 Series trains.
Not willing to lose out to it’s competitors, Hankyu Railway needed even better limited express trains, but at the same time, concluded that building one based on existing commuter trains simply wouldn’t do.

Introduced in 1976, the 6300 Series was Hankyu Railway’s first (and last) train designed entirely for limited express services. Manufactured by Alna Koki between 1975 and 1978, they began replacing the 2800 Series by late 1976.
The replacement was fully completed by fall 1978, with the last 2800 Series train making it’s final limited express run by the 25th of September 1978.

In the end, the 2800 Series ran as limited express trains on the Kyoto Line for a relatively short time, with the longest-lived sets reaching only 15 years, and some not even going past 5 years!
With these trains being still relatively new, Hankyu Railway decided to “downgrade” and convert them to commuter trains, by replacing transverse seating with longitudinal seating and by adding the “missing” central passenger door, replacing the central passenger window, and adding air-conditioning.

Re-entering service in 1981, these were initially used as express and rapid service trains in 8-car formations, subsequently, most were shrtened to 6-car sets and “downgraded” to local services, with some being also transferred to the Kobe Main Line.
Finally, the 2800 Series began to replaced by the last batches of the 8000 and 8300 Serieses by the early 1990s, with 2800 Series regular services ending by mid-august 1995.

Most 2800s cars have been scrapped, but two (well, one and 1/8th of a car) have been preserved, both unfortunately not for pubblic display: the cut-up cab end of car 2801 has been preseved by Hankyu Railway and it’s currently stored at the Hirai Depot, while car 2861 has been bought for 100’000 Yen by a certain Sumio Yoshimori, a private individual from Fukuchiyama (Kyoto Prefecture) who had it installed in his backyard, using it as a depandance for his house.