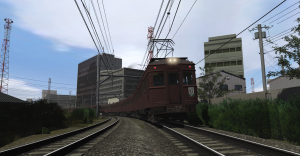 This is a Reskin. In order for this train to work, you’ll need to download and install first the original Hankyu 710/760 Series made by Keimei and avaible on the DLS.

The 710/760 Series was introduced in 1950 to replace rolling stock damaged or destroyed in the war, and to a larger extent, to standardize rolling stock designs for the then-newly-acquired Kyoto Line.

The Kyoto Line had in fact been opened in 1928 not by Hankyu, but by Keihan Railway, as the “Shin-Keihan Line”. During the war, Hankyu and Keihan were forcibly megred by order of the imperial government (as a way to rationalize railway operations in the context of broader wartime austerity mesaures), forming the “Keihanshin Kyuko Railway” (similar mergers were also made in Tokyo, with all the private railways then in operation being merged into Tokyu Railway, and elsewhere).

After the war, the Keihanshin Kyuko conglomerate began to broke up by itself, with Keihan Railway re-establishing itself in 1949 as a newly-independent company. However, only the current Keihan Main Line and Otsu Lines networks were handed over to Keihan Railway. The Shin-Keihan Line remained under ownership of Keihanshin Kyuko, wich soon after, restructured (and renamed) itself as the current-form Hankyu Railway.

However, the newly-renamed Hankyu Kyoto Line suffered from a few issues, mainly concerning rolling stock: putting war devastation aside, wich had decimated Hankyu’s and many others’ fleets, the Kyoto Line used Keihan Railway’s standards rather than Hankyu Railway’s ones, wich made the line incompatible with the rest of the network. As an example, the Kyoto Line was electrified from the start with 1500v DC catenary, while the rest of Hanky’s network still used 600v DC, a remnant from the era when Hankyu was an interurban tramway. Therefore, a new standardized train was urgently required.

The new trains came out as an amalgamae of the Hankyu Kobe Line 800 Series and the Shin-Keihan Line P-6 Series (later Hankyu’s 100 Series): from the former they inherited the general dimensions and sizes and intrestingly enough, the passenger window design, while from the (much more advanced) latter one, they inherited the general appearance (such as the passenger windows arrangment) and most traction equipment. However, these trains packed also some new systems compared to their predecessors: notably, as they were intended to run on the 600v Takarazuka Line as well, they were multi-voltage-capable (1500v/600v DC) and were also equipped with the new FS-5 and FS-3 type bogeys.

The 710/760 Series was originally intended for express services, and as such they had only two passenger doors per side. When all Kyoto Line express services were reassigned to the much more modern and advanced 2800 Series trains in 1968, all 710/760 Series trains were “downgraded” and cascaded to local services. With the only two passenger doors proving immediately inadequate, the whole fleet was with the addition of a third central door in about a year.

In 1971 yet another modification was made to these trains: the obsolete top-mounted single headlight was changed to a far better twin-headlights arrangment, identical to the one already extensively used by Hankyu on all of it’s “standard commuter trains” (2000 Series et cetera). In the same period, six out of seven 2-car sets were reformed into three 4-car sets, with Set No.1 (cars 711 and 761) remaining the only 2-car set of the 710/760 Series.

Displaced yet again by newer and more advanced trains, by the mid-1970s the 710/760 Series was withdrawn from “frontline” Main Line services and moved to branchlines, in this case, the Senri and Arashiyama Lines. Finally, they were displaced from these branch lines as well, with withdrawals of the 710/760 Series beginning in 1981 and ending with the last set being retired in 1983. Unfortunately, all were scrapped soon after.