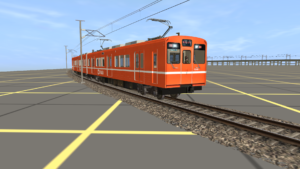 On the shores of Lake Shinji.

The Ichibata Electric Railway bought two 2-car sets converted from MoHa cars in 2014. Re-named the “1000 Series” and repainted into a full-orange (with a white line) livery, they entered service in the same year on the railway’s two lines, replacing a pair of 3000 Series sets (former Nankai 21000 Series trains of 1958 vintage).