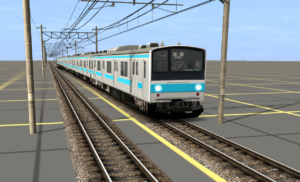 After the Yamanote Line, 205 Series sets were also introduced on the Kansai Area’s busiest line: the “Keihanshin Line”, wich was the nickname for the combined local services on the Tokaido Main Line between Kyoto, Osaka, Kobe and Nishi-Akashi, with trough-services as far as Kusatsu and Kakogawa.

Orignally, JNR inteded to introduce a large quantity of 201 Series trains on the Keihanshin Line, but as production was stopped in 1983 due to high costs, only a limited number of 201 Series sets entered service in the Kansai Area. Therefore, (similarily to what was to happen in Tokyo on the Chuo-Sobu Line briefly after the privatisation), JNR decided to introduce 205 Series trains instead, picking up where the 201 Series left.

Almost identical to their Tokyo counterparts (except for the saftey system, as the Keihanshin Line isn’t equipped with ATC, the simpler ATS-P was used), they were formed in 7-car sets and they entered service in August 1986. By the 1st of April 1987 (JNR’s privatisation) only four sets (a total 28 cars) had been built, and they were all inherited by the newly-formed JR West, wich later ordered a few more 205 Series sets from Kinki-Sharyo.