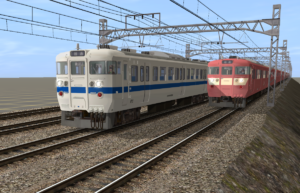 In the 1970s, as JNR planned to expand it’s AC electrification system, it reckoned that building a new standard type train capable of operating on both frequencies was a more cost-effective solution than building multiple types.
As such, the 415 Series was designed, using the proven MT54 motors and a new type of transformer, the TM14, wich was capable of converting AC current at both 50 and 60 Hertz,making it effectively a “tri-voltage train” (1500V DC, 20Kv AC 50Hz, 20Kv AC 60Hz). The bodyshell was also improved compared to earlier trains, now resembling more closely the 113 Series’ one.

Built jointly by almost all the rolling stock manufacturers of Japan (including Hitachi, Kawasaki, Kinky Sharyo, Nippon Sharyo and Tokyu Car Co.) with electrical equipment made by Toshiba and Mitsubishi Electric, the first 415 Series trains, formed in 7 and 4-car sets entered service in 1971, fitted in JNR’s reddish-brown and cream livery for multivoltage trains, being deployed at the same time on the Tohoku Main Line and on the Kagoshima Main Line in Kyushu.
As more and more lines were electrified, 415 Series trains entered service steadily in Kyushu and Tohoku, reaching as far south as Kagoshima or north at Aomori.  As there was a continously high demand for these trains, production lasted uninterrupted for 14 straight years!

In 1985, the Expo ’85, a specialized world fair, was held in Tsukuba, a planned “New Town” located noth of Tokyo and served by the Joban Line. As such, the 415 Series, wich were the main commuter stock in service on the Joban Line, were repainted into a new white livery with a blue line, to renew the appearance of the line and to improve the image of JNR. This new white livery was later extended to the rest of the 415 Series fleet (and on the older 401, 403, 421 and 423 trains) in service in Tohoku and in Kyushu too.

This livery change continued even after the privatisation of JNR in 1987, being carried on by both JR East and JR Kyushu, wich inherited the respective 415 Series fleets of the Tohoku and Kyushu areas.

Multivoltage suburban EMU situation before the introduction of the 415 Series.

Having four largely similar, but different trains meant higher construction and operating costs and higher complexity in the deployment of sets, reason why JNR sought to build a standardized train type. 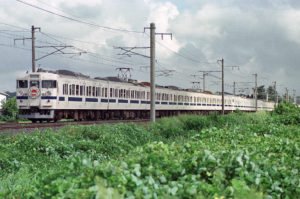 The 415 Series’ livery was changed from dark red to white and blue to give the Joban line a renewed aspect in occasion of the Expo itself.