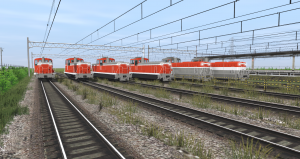 The DE11 diesel locomotives came to be in the late 1960s, when JNR was looking for a suitable replacement for steam locomotives wich were still used in marshalling yards (especially for “hump” shunting) as the DD13 diesel shunters had proven too underpowered for the job. The concept of an “heavy shunting” diesel locomotive had been on the “to-do” list of JNR since the late 1950s, but was always postponed due to other more “important” things. Finally, this project was revived in 1967, with the arrival of the first DE10 medium shunters.

That year, JNR ordered a “pumped up” version of the standard DE10s, classified “DE10 901”. Among the modifications made, the first one was getting rid of the steam boiler for passenger car heating, wich was replaced by a block of concrete acting as a dead weight, then the motor output was increased, equipment for multiple-unit-working was removed and finally, the weight of the locomotive was increased yet again, to increase adherence, with more concrete acting as dead weight. The latter modification increased the locomotive’s weight from 65 to 70 tons, with the per-axle weight increasing as well, from 13t to 14t, effectively sending “down the drain” all previous efforts JNR made to get the “DE10 design” to have a low axle weight, wich however did not pose any problem in marshalling yards (for wich the new heavy shunters were intended), as due to their nature, they are always entirely made of heavy-duty tracks.

Following successful testing of DE10-901, JNR ordered the production of the new diesel heavy shunting locomotives, wich were classified as “DE11s”. Production began in 1968 and ended in 1979 with a total of 116 units having been manufactured jointly by Kawasaki Heavy Industries and Nippon Sharyo, with some of the early units having been built by Kisha Seizo as well.

-The 0 subserieses (DE11-0s) were 65 units essentially identical to DE10-901 manufactured between 1968 and 1970. These were the first to enter service, being assigned at the Shin-Tsurumi and Omiya yards in Tokyo and at Suita yard in Osaka, replacing the D51 and 9600-type steam locomotives in marshalling yard use.

and finally, the -2000 subserieses, wich are just four units built in 1979 specially equipped with “noise-reducing” fetaures for usage in Yokohama-Hazawa yard, wich is located very close to residential areas.
Depsite the small size of the subseries (compared to the rest of the DE11 fleet), these are however probably the most recognizable of the DE11s, as the bodyshell had to be slightly lenghtened by two meters (from 14,150mm to 16,150mm) to fit sound-proofing equipment and exhaust silencers, and a very distinctive integral “noise-reducing-skirt” was also added as well.

All three subseries lived a tranquil life until the mid-1980s, when during the harsh “JNR reorganization process”, most of the -0s and -1000s became surplus due to the abandonment of most marshalling yards, as conventional freight trains became to be replaced by fixed-formation container trains. Some surplus units of both earlier subserieses were re-purposed for freight, and in some cases even passenger services on branchlines, but due to their high axle load wich rended them unable to run on most lightly-tracked lines, by 1984 all DE11s were returned to marshalling yards, never entering service again.

In the end, by March 1987, the vast majority of DE11-0s and DE11-1000s had been scrapped, with only 3 DE11-0s and 10 DE11-1000s “surviving” the JNR privatization, all being inherited by JR East. The three DE11-0s didn’t live much longer, as by 1990 all three were written off and scrapped. DE11-1000s instead, due to their higher power, managed to remain in service for a bit more, being assigned to passenger-coach shunting at JR East’s Tabata and Shinagawa yards. However, with the end of conventional locomotive-hauled passenger trains, by 2010 the DE11-1000s began to be retired and scrapped yet again. As of today, we know for certain that unit DE10-1041 is still in service with JR East, assigned to Takasaki depot, while units 1045, 1029, 1032 and 1034 have been transferred to JR Freight between 2010 and 2013, altough we don’t know for sure if they’re still in service as of now. All remaining units are assumed to have been scrapped.

While the fate of the first two subserieses wasn’t one of the most rosy, the DE10-2000 Subseries instead, due to their high “specialization” is still very well alive and active, with all four units having been inherited by JR Freight in 1987. As of 2018, all four units are assigned to Shin-Tsurumi depot for services in the Yokohama-Hazawa and Sagami yards. Occasionally they’re also used to haul new Sotetsu Railway stock onto the latter’s premises, and until very recently, they were also used for “mainline” freight workings on the Sagami Line. All four units have been repainted into the JR Freight red and grey livery for diesel locomotives, but unit DE11-2003 has been fitted in a “wide white line” variant on the latter, identical to the one carried by DE10 1073.

While all DE11-2000s are still in service, due to their age, JR Freight has already set forth to replace them (and the last remaining DE10-1000s – if there are still any around!) with the new DD200s diesel locomotives, wich are already (albeit slowly) spreading thruought JR Freight’s major yards.

The noise-reducing fetaures of the DE11-2000s were derived from the ones already used on the 85ED-1 electric and 70DD-3 diesel locomotives (both actually manufactured by Kawasaki and Nippon Sharyo in 1976 and 1975 respecitvely) in use on the Nippon Steel Yahata works dedicated “Kurogane Line” in Kitakyushu, wich connects the steelworks to the Kagoshima Line at Yahata Station, passing trough a residential area.