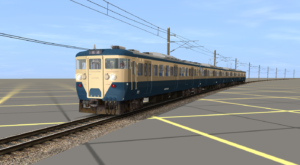 In the 1970s, most of JNR’s electrified rural lines were operated with obsolete pre-war and substandard war-time built stock, both equally inadequate, and in the case of the latter, particularily unsafe.
Those living along these lines had hoped for a replacement, but given these were lines with low ridership, JNR prioritized the introduction of new rolling stock to the more heavily-utilized lines.

In these circumstances, the steeply-graded and very difficult Minobu Line was operated with all pre-war stock, such as the 30, 40, 42 and many more. Furthemore, most of the older stock wasn’t compliant with the recently-updated fire resistance regulations (being a mountain line, the Minobu Line has quite a lot of tunnels).

As a cheap alternative to buy new stock, JNR decided to manufacture an EMU with new bodyshells (based on the ones of the 115 Series), but with bogeys, traction motors, brakes and most electrical equipment salvaged from scrapped 63 and 72 Series sets.

This “semi-new” type of EMU was not classified using JNR’s three-digit classification of it’s “new performance trains”, but rather using the old 2-digit numbering scheme.

Classified “KuHa 66” (for the cab cars) and “MoHa 62” (for the intermediate motor cars – there were no trailers due to the steep gradients), the first 4-car set entered service in early 1974, followed by three sets more by the end of the year.
All of these were fitted in the blue-cream “Yokosuka Livery”, wich was already carried by a majority of the older stock.

The introduction of the KuHa 66-MoHa 62 series allowed JNR to retire some of the oldest cars in service, but only few; in fact, the majority of the line’s fleet was still composed of old-style cars until the 1980s.

In early 1980, JNR finally decided to introduce proper 115 Series trains to the Minobu Line, with the first sets entering service in 1981, replacing all the trains in service on the line (including the KuHa 66 and MoHa 62 Series cars) by 1984.

All the cars of the KuHa 66 and MoHa 62 Serieses were scrapped by 1986, except the front end of KuHa 66 002 wich was saved and it’s now preserved (and used as a simulator) at the Sakuma Rail Park at Chubu-Tenryu Station (Ida Line) in Hammatsu (Shizuoka Prefecture).

As a side note, KuHa 66 002 has not been preserved in it’s original livery – it has been repainted into a livery similar to JR Central 119 Series’ one, as it acts as a stand-in for the latter, wich ran on the Ida Line (along wich the museum is located).

JNR decided not to use the three-digit classification for the KuHa 66 and MoHa 62 Series as they were technically-wise closer to the old two-digit stock (in fact, most of the traction components were salvaged from the latter) rather than to the “new performance trains” (of wich the 115 Series was part) wich used the three-digit classification system.