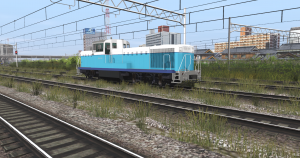 These locomotives were dedicated for the “Island Express Shikoku” wich began services in April 1987 as one of the first (if not the actual first) joyful trains introduced by the newly-privatized JR Group.
The train, wich ran all around Shikoku island (and sometimes also towards Honshu, via the Seto-Oashi bridge) was formed of lightly refurbished 50 Series coaches, painted in a light blue and white livery.

JR Shikoku had two DE10s assigned to the Island Express Shikoku – nos. 1014 and 1036 (with the former one being later replaced by DE10 1148) – all repainted in a light blue and white livery matching the coaches’ one.

The current whereabouts of the three DE10s assigned to the Island Express Shikoku is unknwon, probably after the end of the services those were repainted back in the standard DE10 red and greay livery and were used for a few years more until their eventual withdrawal and scrapping.

For services towards Honshu, via the Seto-Oashi Bridge, the dedicated DE10s weren’t used – their place was instead taken by electric locomotives, often in the form of an EF65 painted in the standard “DC-only” dark blue and cream livery.