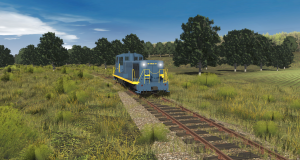 In 1991 the Kamiooka Railway bought DE10 1005 second-hand from JR Shikoku, to replace one of it’s ageing KMDD13s (wich were two DD13 locomotives that the railway had inherited from JNR upon it’s takeover of the Kamiooka Line in 1984) on the railway’s freight services. Reclassified KMD101 and repainted head-to-toe in a dark blue livery with yellow details and a 5-point star on the sides of the “short hood”, the locomotive entered service in mid-1991. Soon after, the Kamiooka Railway acquired another DE10, no.1010, as well, but this time only as a spare parts donor.

However, the career of the KMDE101 was relatively short, as in 1996 the Kamiooka Railway made an agreement with JR Freight: from the 16th of March of that year, freigth trains began to be hauled by JR Freight-owned locomotives manned by Kamiooka Railway crews, thus the lone KMDE101 became surplus, was retired and put up for display in front of Okuhida Onsenguchi station, but was later scrapped in 2007, after the Kamiooka Railway had closed altogheter.