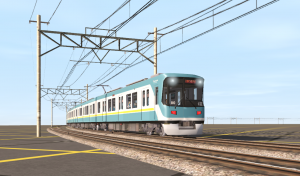 This is a Reskin. In order for this train to work, you’ll need to download and install first the original Keihan 800 Series made by Keimei and avaible on the DLS.

The 800 Series is with all due probability Keihan Railway’s most famous train, easily overshadowing the 8000 Series limited express and the 5000 Series commuter train.

The rather interesting story of this train began in the late 1970s, when Kyoto City was already drawing up plans for a second east-west subway line (the first subway line, the north-south Karasuma Line, was nearing completion and would open shortly after in 1981).

One of the most pressing issues with planners at the was the Keihan Keishin Line, especially the western “inner-urban” section between Keishin-Sanjo and Yamashima stations, where the trains had to run “tramway-style” on the increasingly busy Sanjo road, sharing the right-of-way with cars, busses and trucks. Furthemore, that very section of the Keishin Line, having evolved from an interurban tramway, permitted a maximium train lenght of only two cars and with the majority of stops being street-level boarding ones, the swiftness and capacity of the line were severily limited.

In the end, an agreement was reached between the Keihan Railway, wich was looking for ways to increase the line’s capacity, and the Kyoto City government, wich would’ve rather preferred to close the Keishin Line altogheter (or the Sanjo-Yamashina section at the very least): the plans for the Tozai Line were modified to allow for inter-running with the Keishin Line.

However, the new plans became the source of several technical challenges: while connecting the Tozai Subway Line and the Keishin Line was relatively easy (as the two lines shared the same 1435mm standard track gauge – only the voltage of the Keishin Line had to be increased from 600v to 1500v DC to match the one of the subway), the trough-running service pattern required that the trains had to be able to be a Subway train with platform boarding, high accelleration and several doors per side, a mountain train capable of ascending and descending steep slopes safely but quickly and a tramcar able to navigate trough automobile traffic on the last remaining street-running sections, all three at once.

Ultimately, Keihan Railway’s designers were able to successfully combine all three “souls” into a single train, the result being the 800 Series. With their 16.5m car lenght, among the shortest for “regular” commuter trains, the 800 Series resembled a scaled-down version of the 7200 Series in use on Keihan Main Line services (the former’s bodyshell design was indeed based on the latter) and packed a lot of technical advancments for Keihan Railway, being the first to adopt a single-arm pantograph, LED destination indicators and an IGBT-VVVF inverter control, manufactured by Toyo Denki, wich allowed for a reasonable (given the planned services) maximium speed of 75Km/h and a maximium accelleration of about 1ms2.

For subway running, the 800 Series is equipped with both ATC and ATO, allowing semi-automatic operation (almost a requirement in the case of the Tozai Line, as it is wholly equipped with full-height platform screen doors). For the “mountain railway” section between Yamashina and Kamisakemachi, with slopes up to 61 permil, the 800 Series was designed as a fully-motored train (each bogey has a motor) and also saw the brief, exceptional, return of cast-iron clasp brakes, wich had been rended nearly extinct by the introduction of the disc brake, as the engineers felt that the former was more suited for continuous slope-descending braking or generally, safer against a possible runaway.

Finally, for the last remaining street-running section, between Kamisakaemachi and the terminus of Biwako-Hamaotsu, the 800 Series was equipped with warning lights mounted on the underside of the carbody. Furthemore, as an added saftey precaution against possible crashes with cars, the entire bodyshell of the 800 Series is made out of heavy steel instead of the more lighter alluminium.

Built by Kawasaki Heavy Industries, the full fleet of eight 4-car sets entered service on the 12 October 1997, on the day that the voltage of the Keishin Line was raised to 1500v (and the 600v-only 80 Series retired).

While the Tozai Line services were run one-man operated since the opening of the line itself, the Keishin Line retained conductors for a few more years until 2002, when both the Keishin Line and the Ishiyama-Sakamoto Line (the two togheter make up the “Otsu Lines” network) were converted to one-man operation as well.

Originally, the 800 Series trains were fitted with a white and light-blue livery (wich represented the clear waters of lake Biwa) with a thin yellow line (the traditional “Kayasu” yellow wich also represented the Keishin Line), but starting in 2017, Keihan Railway decided to repaint the “Otsu Lines” network’s trains in the company’s new “standard” livery of dark green and white. The first 800 Series set repainted with the new livery re-entered service on the 7th of August 2017, and on the 10th of November 2020, the last set was repainted as well.

As of now, all eight 800 series sets are still in operation, running between Biwako-Hamaotsu on the Keishin Line and Uzumasa-Tenjingawa on the Tozai Subway Line. The 800 Series trains can technically also be able to “take the place” of a Kyoto Subway 50 Series and run to the opposite end of the Tozai Line as well (Rokujizo Station), but while possible, this has never happened. Furthemore, the 800 Series can not travel on the Ishiyama-Sakamoto Line due to it’s more stringent loading gauge, and as such is confined to the Keishin Line only.

Being quite a one-off, higly-specialized train type, Keihan Railway has absolutely no plans to replace the 800 Series, meaning that these unique trains will continue their equally unique journey, shtuttling between Kyoto and Lake Biwa for the forseeable future.

Due to the extensive usage of new technologies and the highly specialized equipment, the 800 Series has been dubbed the “costilest train per square meter in Japan”: each 16,5m-long 800 Series car costs 200 million yen (or five milion yen per square meter), wich is even more than the Shinkansen 500 Series, wich costed 300 milion yen per each 25m-long car (however, the Shinkansen 500 Series still remains the overall most expensive train in Japan, due to the far larger number of cars built compared to the Keihan 800 Series).

Evry year in October, services on the Keishin Line suddently become more nerve-racking for drivers than they already are, as Otsu city hosts it’s festival, with a procession of traditional Hikiyama chariots touring the city, among other things, passing along the Keishin Line street running section. During the festival, Keihan Railway dispatches experienced drivers from the Main Line to assist and to act as “look-outs” for their Keishin Line colleagues, and also has several “ground” workers on standby to make sure that the chariots and the crowds do not pose an hazard to the trains (and vice versa), and most importantly, to make sure that nothing or nobody comes into contact with the 1500v catenary, wich is actually very likely, as the towering chariots are almost as high as the trains’ pantographs.

Here’s a video by “toppo jiyo” on the matter: