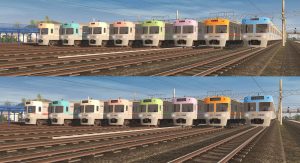 The 1000 Series was introduced by Keio Railway in the mid-1990s to achieve (like many other similar trains) a number of different goals on the Inokashira Line, namely the replacement of the oldest 3000 Series sets, wich had been manufactured around 1962 and depsite their outstanding quality, most were now severely fatigued after 30 years of intensive service, the easement of overcrowding and a general speed-up of the Inokashira Line services.

Thus, it was decided that rather than following now inadequate 18m-bodyshell with three doors system, the new Inokashira Line would now follow the well-established 20m-bodyshell with four doors, the absolute overwhelming standard among Japanese commuter trains. However, since the 3000 Series was a very well appreciated train, Keio decided that the new 1000 Series should still keep many distinctive fetaures of the older trains, hence the new trains were designed with stylish wrap-around front windows with stainless steel rims and most importantly, the upper area of the front portion of each train (plus the side bands) were to be painted in one of the seven pastel colours-based liveries already in place on existing 3000 Series trains: Light Blue, Ivory, Salmon Pink, Light Green, Violet, Beigie or Blue.

The result was a rather pleasant-looking and well-designed train, that still managed to remain distinctively reminescent of the 3000 Series, depsite incorporating several necessarily modern fetaures, such as the (rather well “disguised”) front emergency door and the LED destination boards.

The first order for ten 1000 Series 5-car sets was placed in the first half of the 1990s, and two companies were selected for the task: Nippon Sharyo, wich was to build three sets, and Tokyu Car, wich was to build the remaining seven.
Production started in 1995 and the first set was delivered in late 1995, entering regular revenue services on the Inokashira Line on the 9th of January 1996. The remaining nine sets were built in the following months up until the last one entered service in 1998. This first order trains (known as the 1st/2nd batch) fetaured a bodyshell and interior fittings derived from Keio’s then-lastest 1372mm gauge train, the 8000 Series, wich had been introduced a couple of years before (and had been built jointly by Nippon Sharyo and Tokyu Car like the 1000 Series).
One interesting trait is however that the first order trains fetaured two different inverter types: even-numbered formations (Ivory white 1702F, Green 1704F, Beige 1706F, Light Blue 1708F and Pink 1710F) were fitted with a rather modern Hitachi IGBT-VVVF inverter, while odd-numbered formations (Light Blue 1701F, Pink 1703F, Violet 1705F, Light Blue 1707F and Ivory white 1709F) were fitted with the same “screaming” Toyo Electric GTO-VVVF inverter as found on the Tokyu 1000 Series and other Tokyu 18m-type rolling stock.

In service, the 1000 Series had been very well recieved as a useful relief during peak hours, and with more and more 3000 Series passing the 30 years mark, Keio railway started to evaluing for an eventual full-replacement of the 3000 Series with the new 1000 Series.
To this end, a further five 1000 Series sets (the 3rd/4th batch, formations 1711F to 1715F) were built by Tokyu Car between 2002 and 2004, with the first entering service around 2003. These retained the same 8000 Series-derived bodyshell as of the 1st/2nd batch, but with different interior fittings, this time derived from the in-production 9000 Series.
By the mid-2000s, after the replacement of the oldest, non-refurbished 3000 Series sets, the Inokashira Line fleet was now formed nearly evenly of 1000 Series (15 sets) and 3000 Series (14 sets) trains.

However, by then even the refurbished sets were starting to age, and Keio railway finally decided to standardize the Inokashira Line fleet to the 1000 Series, ordering a new and final batch of 1000 Series trains.
This time,  the so-called 5th/6th batch was manufactured entirely by Nippon Sharyo and was entirely based around the 9030 Series for Shinjuku Line trough-services, not only for the interior fittings, but this time for the bodyshell as well, abandoning the side strenghtening ribs for a smooth-side bodyshell. Another difference from the earlier 1000 Series batches is the destination indicator, wich on the new-batch trains is now flush with the rest of the bodyshell.
This batch consisted of 14 sets, classified as Formations 1721F to 1734F (formations numbers 1712F thru 1720F are blank) entered service around 2008, replacing the remaining 1000 Series sets on a set-per-set basis.
This replacement came to an end around fall 2012, as the last 1000 Series formations was delivered, the last two surviving 3000 Series sets were retired, with the last one making it’s final run on the Inokashira Line on the 11th of November.
After that date, the Inokashira Line returned for the first time in almost 20 years to a fleet standardized to one train series.

As of now, all 29 1000 Series sets are still in service, and depsite nearing the same “30 year mark” (for the 1st/2nd batch trains), Keio has no plans to proceed to a replacement. Instead, a refurbishment program for the earliest sets was started in 2016 and ran trough 2020. Modifications included a general overhaul of the bodyshell, the replacement of some mono-chrome LED destination indicators to full-colour LED ones and the replacement of the pantographs (from square to single-arm type) on some sets.
A couple of livery changes have been made as well: in 2008, as the 5th/6th batch trains were being built, it was decided that the two sets that were alloted the “Beige” livery would be changed to a completely new orange livery, on the grounds that the Beigie livery was too similar anyway to the Ivory white and Pink liveries, and thus no 5th/6th batch set ever carried the Beigie livery. This modification however was applied to the earlier sets as well, with sets 1706F (1st/2nd batch) and 1713F (3rd/4th batch) being repainted from their original Beigie livery to the new orange one in 2010.

Finally, another livery change was carried out in fall 2012: 5th/6th batch set 1729F was repainted in a commemorative “Rainbow” livery. Originally scheduled to carry this livery for roughly a year, it was so well recieved that Keio railway simply decided to keep it permanently – indeed set 1729F is still painted in the rainbow livery, running up and down the Inokashira Line, from Shibuya to Kichioji, along it’s 28 other siblings.

On the 1000 Series, wich set was to recieve wich livery was decided with the following method: the first set was to be painted light blue, the second ivory white, the third pink, the fourth green, the fifth violet, the sixth beigie and the seventh blue, then starting back from light blue for the eight set and onwards.
In other words, as far as the 1st/2nd batch goes, on accounting of the “odd/even numbered formation” inverter types, each of the ten trains was different in one way or another from the other.

Correlated to the above, this is likely my heaviest, largest (not to mention time-consuming) “non-multiple series” pack to-date: 70 individual car models for a 313MB-heavy .Rar (or a mouth-watering 1.34GB of uncompressed stuff!) – each of the 1st-batch trains is individually modelled and has it’s own consist!