By the late 1980s, with most of the extensions to the Sagamihara Line (and by extension to the whole of Keio’s railway network) nearing completion, Keio Railway began to look into a modernization program for the whole company.
At the time, despite the increasing ridership and copious purchases of new rolling stock, Keio Railway still remained a somewheat old-fashioned company, still retaining some obsolete practices and a general overall “old” look to it’s stations and especially rolling stock.

Thus, in 1989 the “Refreshing Keio” program was launched: the company was structured, a new logo was created, the company’s busses and taxis were repainted into a new livery of “Keio Red” (altough closer to Magenta) with a thin “Keio Blue” line, a computerized information system was implemented, new uniforms were introduced and new line colors were applied.
However, the centerpiece of the “Refreshing Keio” program was to be a new train series wich, for the first time in Keio’s history, was intended to cover all services equally well, from locals to limited expresses, on all of Keio’s 1372mm gauge lines.

Part of the necessity of such a modernization plan was also likely due to the increasing promotion by the newly-formed JR East of it’s own commuter services on the Chuo Line, wich were in direct competition with Keio Railway, a somewheat radical change from the relative slumber of the old JNR, resulting in the necessity for Keio to promote it’s services as well so as to not be out-competed.

As the key component of the modernization plan, the new trains, to be classified as the 8000 Series, were to be entirely designed from scratch, adopting the newest technologies available at the time, something more or less revolutionary from Keio, whose rolling stock came from a 20-year period of slow, constant evolution, starting from the 6000 Series of 1972 (and for some fetaures, this “evolutionary” design had roots in the even older 18m-type stock such as the 5000 Series of 1963 and even more old “green trains” of the 1950s!).

The new trains fetarued a 20m stainless steel bodyshell, as was practice, with a large front mask made of Fiber-Reinforced Plastics, with a distinctively pleasant rounded look and large front windows with excellent visibility. Bucket-type seats were adpoted for the first time, as was a new “Train Navigation System” in the cab, the predecessor to the current self-diagnostic systems such as JR East’s TIMS.
For the first time, Keio Railway also adopted the new three-phase inverter control system, being one of the last major private railways in the Tokyo area to do so, with the choice being Hitachi’s popular GTO-VVVF system.
Finally, ditching the old dark red livery, the 8000 Series was painted in Keio’s new red and blue colours, the same that had been applied a few years earlier on it’s taxis and busses, giving the new trains a far more distinctive and modern look.

Manufactured jointly by Nippon Sharyo and Tokyu Car Corporation, the first batch of 8000 Series trains began to be delivered in early 1992, consisting in fourteen 6-car sets and fourteen complementary 4-car sets, intended to be operated togheter as 10-car sets between Shinjuku and Takahatafudo, and then split there, with one set running to Keio-Hachioji (the terminus of the Keio Line) and the other running on the Keio Takao Line to Takaosanguchi.

Upon their entrance in service on the 11th of May 1992, the new 8000 Series trains were extremely well recieved by both railwaymen, wich found them fairly easy and docile to drive, and by commuters alike, wich found them comfortable, spacious and bright, especially if compared to the older 7000 and 6000 Serieses.

Deliveries of the first batch of fourteen 6+4-car sets was completed in December 1994, and in 1995 deliveries began on a second batch, this time formed as a seamless 8-car sets, intended for the newly-extended Sagamihara Line: the first set was delivered in January 1995, and the thirteenth and final was delivered almost exactly four years later in January 1999.
By the turn of the millennium, Keio had a total of twenty-seven 8000 Series sets in it’s fleet (more or less split equally between the Keio Line and the Sagamihara Line) for a total of 244 cars.

From then, no major modification was carried out on the 8000 Series until the late 2000s: with the increase in passengers and a general restructuration of services on the Keio Line and the Takao Line, splitting and rejoining trains at Takahatafudo Station was no longer deemed necessary, with Keio opting to convert the existing fourteen 6+4-car sets into seamless 10-car sets.
This conversion, wich involved cutting the front cab section and replacing with a “passenger section” (something made unusually handy and rather easy by the size of the front FRP mask, wich required little to no cutting of the original bodyshell), began on a set-per-set basis in 2013 and carried on all the way to 2019, when the last set was converted. This conversion was also matched at around the same time by a general refurbishment of the interiors, replacement of the original roller-blind front destination signs with LED-type ones and in more recent years, the replacement of the headlight lamps  with LEDs.

In fact there hasn’t been any retirement yet, nor scrapping, except for a cab car of a 6+4-car set, wich was involved in a landslide accident on the Takao Line in 2009, deemed beyond repair, scrapped and promply replaced by a newly-built intermediate car (since by then splitting and rejoining sets was becoming increasingly rare), resulting in an interesting and unique set with a cab car coupled “cab-side” with an intermediate car. This was however shortlived, as this was one of the very first sets to be converted into “seamless” 10-car set a few years later.

Otherwise, in an interesting tale for a train that only had one car scrapped, a handful of cab sections are already being preserved! These are the surplus cab sections resulting from the conversions of the 2010s, with one, the cab end of car 8809 being preserved (and visitable) in it’s as-retirement condition inside a new annex, opened in 2022, to Keio’s “Keio Rail Land” museum.

Trivia #1:
During the design phase of the 8000 Series, various front designs were considered, including a slightly aereodynamic one.

In the end, constrainted by the necessity to maximise interior space and not to sacrify too much cab space, the designers settled for the final pleasant rounded front.

Depsite being fitted with a front emergency plug door, the 8000 Series trains were designed to be easily retrofitted with a walk-trough front, more or less like the older 6000 and 7000 Serieses, with minimal modifications. This however was never carried out, and with the conversion of 4+6-car sets to full, indivisible, 10-car sets, this modifications is highly unlikely to ever happen.

Trivia #3:
In 2017, during the converion works to convert the 4+6-car sets to seamless 10-car sets, on some cars small traces of asbestos were detected in the insulating paint between the trains’ interior and exterior paneling. This was unbeknownst to both Keio and the manufacturers, Nippon Sharyo and Tokyu Car, as the latters assured to Keio that neither had knowingly or intentionally used asbestos-laced paint – asbestos had been outlawed in Japan in 1989, a few years before manufacturing on the 8000 Series began.

At any rate, the asbestos particles detected were very small, and since they were insulated between the external and internal paneling, they did not constitute any health risk for passengers or anyone working near the trains. The cars in questions were quickly sanitized and the conversion process continued without slight delays, and the asbestos-laced components and paint were promptly and properly disposed.

The matter was duly reported to the Ministry of Transportation and the Tokyo Metropolitan Government, jointly by Keio, Tokyu Car and Nippon Sharyo, who are reasonably keen on assuring anyone they did not have any part in this.

It’s still unknown how asbestos particles made their way into a brand-new train built after the outlawing of the substance, more so with both the railway nor the manufacturers none the wiser, altough it’s rather likely as this having been some kind of slip-up or error by the manufacturer of the insulating paint.

Keio’s press release (in Japanese) on the matter.

For the 30th anniversary of the 8000 Series, Keio Railway has been releasing a commemorative ticket and original picture set, all with a superbly distictive and infinitely appropriate 1990s style! 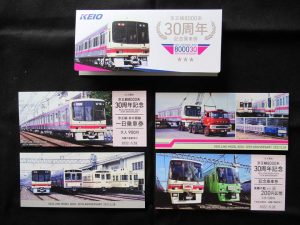 A (rather well-made but badly disguised 3D model of) a Keio 8000 Series, understandably devoid of copyrighted Keio markings, appears in a Dropkick on My Devil! episode. 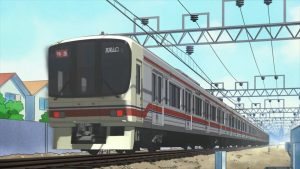 The cab section of car 8809 preserved inside the new Keio Rail Land annex (on the left, togheter with the cab section of  a scrapped 1st-batch 7000 Series set), and on the right, when it was still attached to the rest of it’s car, in the mid-1990s. 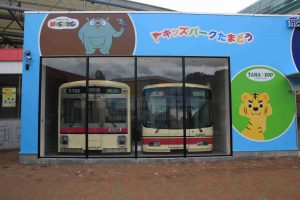 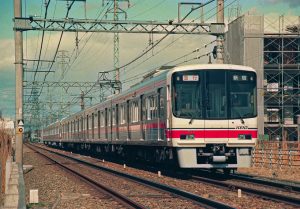 A short promotional film made in the early 1990s by Keio Railway, surrounding the development and introduction of the 8000 Series in service, with some interwiews of commuters and drivers.