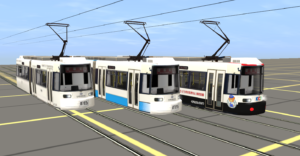 This is a reskin. It’s necessary to download and install the original package first (Berlin BVG GT6N, avaible from wisim-welt.de) in order for this reskin to work.

All the dependencies are included in the package or are avaible on the DLS, except for the interior, wich must be downloaded from trainzelectrotransport.myfreesites.net. It’s included in the ADtranz Variotram pack.

Thanks to a modernization program, by the late 1980s, the Kumamoto tramway was no longer in danger of closing, thus the Kumamoto City Transportation Bureau started to look at ways to improve the tramway service overall.

Unlike their western european counterparts, wich adopted various semi- or fully-low floor trams starting from the late 1970s, Japanese tramways (like eastern european ones) still remained loyal to the proven and simple, but uncomfortable high-floor design, wich, with it’s steep steps, was quite an inconvenience, especially for elderly passengers, wich were a conspicuous part of the tramway’s ridership.

Thus, in 1994, the Kumamoto City Transportation Bureau placed an order for low-floor trams, but as domestic Japanese manufacturers were inexperienced in this field, they had to import low-floor tramway technology from abroad.

One of the few manufacturers to answer to the tender was Niigata Transys, wich had acquired the production licenses for the GTx-type tram from the german ADtranz.

The GTx was world’s first fully-low-floor tram, and was introduced in 1990 in various german cities, starting with Bremen (from wich the tram got the nickname of “Bremen-type”) Frankfurt, then Zwickau, Jena, Munich and Berlin in 1992, wich placed an order for 120 GT6N-type trams to replace all the remaining Gotha-made ones from the 1950s and early 1960s.

At the time, many other german cities were placing orders or already recieving GTx trams, wich had already proved to be a very successful design.

With this premise, Niigata Transys was assigned the contract, and in 1995 the company finalized the technology transfer agreements with ADtranz.

The new Kumamoto City trams were to be a 2-unit, 4-axle type (designated GT4N by ADtranz) bi-directional tram with doors on both sides (most european trams, especially older types, are single-ended and have doors only on one side), with a few adaptments to fit Japanese road regulations. Notably, the maximium speed was lowered from 70Km/h to 40Km/h.

Production of the new trams started in 1996, with ADtranz manufacturing the bogeys and most electrical components (such as the pantorgaph), and Niigata Transys made the bodyshells with assistance from ADtranz engineers. Finally, the air conditioning system was supplied by Mitsubishi Electric.

In 1997, the first completed low-floor tram was delivered to the Kumamoto City Transportation Bureau,after a mandatory cycle of test runs, entered service on the 1st of August, classified as the “9700 Series”. One year later, it was awarded the “Laurel Prize”.

As part of a national traffic saftey campaign, in 2003, unit 9704 was painted in a black and white livery resembling Japanese police cars (complete with red lightbars imitations), and entered service with the “Patrol-tram” nickname.

In 2012, unit 9701 suffered a serious failure, and was stored at the tramway depot, awaiting repairs. It was refurbished and re-entered service on the 1st of October 2019.

As of today, all of the four 9700 Series trams are in operation, having paved the way for the introduction of numerous other tram types based on the GTx design, built entirely domestically by Niigata Transys, such as the Toyama Light Rail TLR0600 Series and other similar 2-car units for the Man’yosen, Okayama and the Kumamoto tramway, where the domestically-built 0800 Series, introduced in 2009, runs alongside it’s foreign-designed predecessor, the 9700 Series.