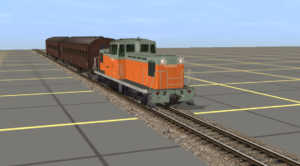 This is a reskin of Keimei’s JNR DD13 Diesel Locomotive avaible on the DLS. All the dependencies used in this model are the original ones.

With the closure of the line in 1987, the three DL55 were taken out of service and, as a buyer could not be found, scrapped shortly after.

The number plate of these locomotives used an unusual numbering scheme: “DL55 No.X” instead of the more conventional “DL55-X”