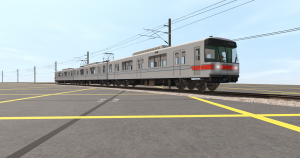 The second local railway to buy withdrawn Hibiya Line 03 Series trains was the Nagano Electric Railway, wich currently has plans to introduce a total of five 3-car sets of ex-03 Series trains to replace it’s 3500 Series fleet, wich interestingly enough, are themselves too ex-Hibiya Line stock: ex-TRTA 3000 Series trains that had been already replaced by the 03 Series back in the early 1990s!

Re-classified as the “3000 Series”, like the Kumaden 03 Series, these were also adapted to one-man operation, and kept the Hibiya Line livery too, except for the front portion, wich has been painted red. The first set quietly entered in service on the 30th of May 2020, with the “official” entry-into-service ceremony being held one month later, on the 30th of June.