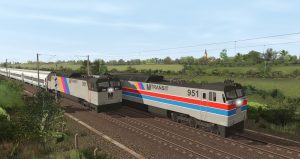 In 1984, thanks to a grant from the Urban Mass Transit Administration, New Jersey Transit was able to purchase ten E60CH electric locomotives from Amtrak, wich were now surplus for the reuqirements to the latter, due to the introduction of the swedish-derived AEM-7s.

The newly-acquired E60s were intended to “fill the gap” left by the retirement of NJT’s dilapdated GG1 electric locomotives in 1983, on North Jersey Coast Line services, wich ran from the Penn Station in New York to Matawan Station (where electric locomotives were replaced by diesels) until 1988, when the electrification was extended to Long Branch Station.

Pressed in service while still “wearing” Amtrak’s Phase II livery (albeit with the addition of several NJT logos), by the mid-1980s most E60s were repainted in the standard NJT grey-and-black livery with orange, purple and blue diagonal bands.

However, E60s were always intended to be a stop-gap mesaure until a better design could be put in service. Finally, in the late 1980s, NJT ordered 32 ALP-44 electric locomotives, wich were a largely improved version of Amtrak’s sccessful AEM-7 design, from ABB (wich was the result of the merger, made a few years earlier, between the Swedish ASEA, the original manufacturer of AEM-7s, and the Swiss Brown-Boveri).

ALP-44s began to enter revenue service in 1990, being used interchangeably with E60CHs, and finally outright replacing them by the 1990s, with the last NJT E60 being retired in 1998.