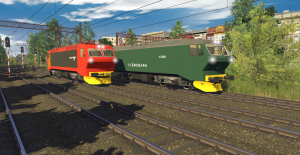 For some dependencies, you will need to install both the Class 47 pack from trainz-bg.com AND the SJ Rc/Rm pack from STL trainz.  All the other necessary dependencies are included in the package or are avaible on the DLS.

By the late 1970s, the Norwegian State Railways were looking to modernize their inter-city services rolling stock. Initially EMUs were considered, but soon the idea was scrapped in favour of conventional locomotive-hauled trains, wich would’ve given NSB more flexibility.

Thus, NSB set forth to acquire a new class of electric locomotives suitable for high-speed services. The choice fell on a design proposed by the West-German Thyssen-Henschel company with electrical equipment from the swiss BBC (Brown-Boveri et C.ie), derived from the Deutusche Bundesbahn Class 120.

DB’s Class 120 was one of the very first electric locomotives in regular operations fitted with three-phase AC motors and inverter-type traction control, something wich would become commonplace from the 1990s onwards, but by then was still revolutionary and modern. As a result of the relatively “experimental” nature of the class, Deutusche Bundesbahn had been quite cautious with it, ordering only two prototypes in 1979, with mass-production being postponed to a later date, after the new inverter-controlled locomotives would’ve been tested enough.

NSB was not so patient and, confident in the initial good results DB had with it’s two Class 120 prototypes in their first year of service, proceeded directly to place an order for six units to Henschel and BBC in the very early early 1980s, to be designated as “Class EL17”. At the same time, NSB also ordered five Co’Co’ diesel locomotives (to be designated as class Di4) to Henschel.

EL17s and Di4s were originally designed to share as much components as possible with each other, primarily the inverter traction control, however due to axle-load restrictions (on the side of the EL17s, wich were Bo’Bo’ locomotives) this was scrapped early on.

All six EL17s (numbered 2221-2226) were delivered in early 1982 and, after some rounds of testing, entered regular services on the 24th of September 1982, hauling the brand-new type B7 coaches made by the Norwegian Strømmens Værksted company for the new Inter-City services.

The entry into service of the EL17 unfortunately didn’t go well: the locomotives were plagued with problems and various technical issues, primarily a tendency for the electronics to overheat, resulting in an highly unreliable locomotive (especially if compared to it’s predecessor, the swedish-built EL16, derived from the successful Rc4 design), thus forcing NSB to initially operate EL17s in pairs, in order to have some backup in case one would fail. Actually, during testing one unit (2224) even caught fire, and was sent back to Henschel in West Germany to be redesigned.

The EL17s were also slightly underpowered, officially being rated for a (rather low) maximium of six hauled passenger cars, depsite the fact that NSB regularily ran eight-car trains.

Due to the unreliability of the class, NSB by the mid-1980s had adopted a policy of using EL17s as less as possible, often using them on one roundtrip per day only, between Oslo and Trondheim.
At the same time, various attempts at improving the reliability of the class were made, both by NSB itself and by Henschel. In the end, each of the six EL17 locomotives delivered in 1982 had adopted different technical solutions.

However, depsite the bad reputation of the class, NSB, feeling confident in the solutions found for the initial six units, proceeded to place an order for six units more in 1987 (in the same year, after nearly a decade of testing, mass-production of the Deutusche Bundesbahn Class 120 began). This second batch was delivered later that year, with the locomotives being numbered 2227 to 2232, and was intended to have all Inter-City trains on the Bergen, Dovre and Sørland Lines to be hauled with EL17s.

In the end, depsite the various improvements, the second-batch EL17s remained fairly unreliable locomotives, with NSB deciding to put some them in Inter-City services only on the Sørland Line, with the others being assigned to regional trains on the Vestfold and Gjøvik Lines.

In the early 1990s NSB eventually settled for it’s original plans for an Inter-City EMU, with the introduction of the Type 70 in 1992 and especially the tilting Type 73, delivered from 1999 onwards.

With the introduction of these EMUs, and also of the swiss-designed EL18s in 1994 (derived from the very successful Re 460s of the Swiss Federal Railways), wich took over all remaining locomotive-hauled services, EL17s quickly became surplus and started to be withdrawn. The first unit to be retired was no.2226 in 1997, followed by units 2221 and 2223 shortly after.

The remaining three first-batch units (2222, 2224 and 2225) were repurposed for empty-stock movments between Oslo Central Station and the nearby Lodalen depot. These remaining three were eventually withdrawn in 2003.

On the other hand, the second-batch units had a better fate, with all six being transferred to the scenic Flåm Line in 1998 to replace the dilapdated EL11s in use there, wich dated from the early 1950s. All six units were given a little refurbishment and a new dark green livery, with the “Flåmsbana” lettering on the sides. The six EL17s were used to form three trains for the line, with two locomotives sandwitching six B3-type coaches in a push-pull formation. This was done, rather than due to the line’s steep grades, to avoid having to run around the locomotive at the two space-constrainted terminuses.

EL17s enjoyed a good service record on the Flåm Line, shuttling tourists back and forth between Flåm and Myrdal for several roundtrips a day. However, in 2014 all six EL17s were replaced on Flåmsbana services by the slightly more powerful EL18s, most of wich had been made surplus by the introduction of the Stadler FLIRT-derived Type 74 and 75 electric multiple units in the 2010s.

Thus, in 2014, the career of this ill-fated class of locomotives came to a close, with the six units of the second batch being retired in one go.

Depsite having been retired in 2014 (and thus not in service anymore by a long margin), EL17s in the Flåmsbana Livery are still commonly fetaured in stock photos depicting the Flåm Line. Articles written well after 2014 that still fetaure these stock images can be found quite often on various websites, including travel websites, blogs and even some “ideally-more-professional” news outlets.