From left to right: original red livery, “Se Norge – Ta Toget” livery with dark grey or red fronts and the “diagonal bands” livery in both the dark grey and red variants.

After the fiasco of the EL17 class, built by NEBB and Henschel in 12 units between 1982 and 1987, wich quickly proved themselves to be unreliable and underpowered, NSB was forced to seek an alternative replacement for it’s ageing and obsolete EL11 and EL13 classes, wich dated from 1950s.

In order to avoid repeating previous errors, NSB decided to be cautious this time; thus, in 1993 NSB imported into Norway two of the finest electric locomotives avaible at the time: the German ES64P “Eurosprinter” prototype of Siemens and Krauss-Maffei and a “Lok 2000” of SLM and ABB, specifically borrowing Re 460 055 from the SBB CFF FFS, the swiss federal railways. Shortly after, in early 1994, Re 460 055 was joined by Re 460 066, wich NSB had borrowed from switzerland in order to provide additional capacity for the 1994 winter olympics in Lillehammer.

NSB was fully satistified with the performances of both locomotive types, with a call for offers being made immediately after. By the bidding deadline of the 8th of May 1994 four manufacturers had made their offers: GEC-Alsthom proposed a modified version of it’s BB36000 “Astride” locomotives (wich had been developed for cross-border services between France and Italy or Belgium), Siemens proposed either the EuroSprinter or an adaptation of the OBB Class 1014 dubbed “Dovresprinter” (wich was to be built partially in Norway), AEG proposed it’s 12X prototype and SLM-ABB obviously proposed the Lok 2000.

SLM and ABB were facing some serious competition, especially from Siemens, however they soon found a good ally in the NSB Drivers’ union: nowegian drivers had made clear that the Lok 2000 was their preference, thanks to it’s comfortable cab and overall performance, and the fact that many were already used (and fond of it), effectively telling the NSB management that there could’ve been disputes if they were to choose a different design instead.Thus, with a bit of “help”, the Lok 2000 offer came out as the winner, with NSB ordering 22 units for a cost of about 700 milion Norwegian Krone.

Initially, NSB was evaluing to purchase a multi-voltage version of the Lok 2000, equipped for both the Norwegian and Swedish (and coincidentally Swiss) 15Kv AC 16,7Hz system and the (slightly newer) Danish 25Kv 50Hz AC system, wich would’ve enabled the new locomotives to run direct services to Denmark via the Øresund Bridge. The dual-voltage capability was however scrapped early on (albeit with the option of installing the necessary equipment at a later date), with the new locomotives coming out as 15Kv AC 16,7Hz-only monovoltage ones.

Classified as “Class EL18”, the 22 new norwegian Lok 2000s had their basic components manufactured in Switzerland and then shipped to Norway, with final assembly by AdTranz (wich had taken over SLM shortly after the contract for the locomotives was awarded) at it’s Strømmen plant near Oslo.

All the 22 EL18s (numbered 2241 to 2262) were all delivered between the 3rd of September 1996 and the 12th of June 1997, entering service immediately after their deliveries. With their entrance in service, EL18s replaced both the EL11 and the EL13 Classes, wich were all retired from mainline services by 1998.

Upon their delivery, EL18s were fitted in the nice NSB’s then-standard red and black livery for electric locomotives; however, starting from 2014, the fleet began to be repainted in a silver grey livery with diagonal bands (either red or dark grey). Later, the diagonal bands were dropped in favour of large prints of beautiful norwegian landscapes with the caption “Se Norge – Ta Toget” (“See Norway – Take the Train”), again with two variants, either with (slightly more common) dark grey fronts or with red ones instead.

Currently, all 22 locomotives are in service and are operated thruought the entirety of the norwegian railway network, including the Begen Line from Oslo to Bergen and the world-famous Flamsbana, where EL18s have been operating ever since the retirement of EL17s, being used top-and-tailing a handful of old-style passenger cars (usually five or six) due to the steep gradients of the line.

During the early days of EL18 services in Norway, five incidents were reported in wich interferences by NSB’s mobile telephone equipment had caused disturbances to the locomotives’ electronics, with the on-board saftey system immediately triggering an unwarranted emergency brake activation. This issue was solved simply by moving the telephone transmitters further away from the lines.

As an hommage of their service in Norway, after their return to Switzerland, the swiss federal railways decided to name the two Re 460s lent to NSB after two norwegian towns: Lillehammer for the 055 and Finse for the 066. Both locomotives are still in service with the SBB CFF FFS.

Bonus Image: Postcard depicting Re 460 066 in service in Norway during the 1994 winter olympics. 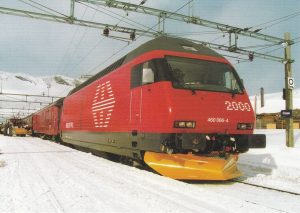