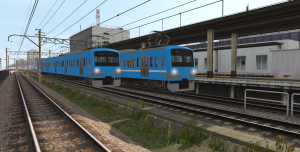 In 2014, Ohmi Railway purchased two withdrawn 3000 Series sets (formations 3007 and 3009, built in 1984) from it’s parent company, Seibu Railway.
The two trains, formed as six-car sets arrived on the Ohmi Railway later that year and were stored on two stub tracks at Takamiya Station, the junction between the Main Line and the Taga Line, waiting for funds to become avaible for their conversion. Funding eventually came in the late 2010s, and in 2019 both sets were moved to Ohmi Railway’s Hikone Depot, where conversion works could finally begin.

The two trains were shortened to two-car sets, with one originally non-powered cab car in each set being converted to a powered car by fitting pantographs, motored-bogeys and traction control equipment salvaged from the intermediate cars that the railway had also purchased. As the two trains had sat in the open for around five years until then, general bodyshell repairation and rust removal works were carried out. Furhtemore, since the Ohmi Railway operates without conductors, both trains had the necessary one-man operation equipment fitted; the destination indicators were changed to LED-type ones and finally, the two sets were adorned in a new light blue livery derived from the one already used by Ohmi Railway’s five 100 Series trains (themselves former Seibu stock as well, being ex-New 101 Series trains purchased in 2013).

The two newly-converted trains were re-classified as “300 Series” set No.1 (ex-formation 3007) and No.2 (ex-formation 3009). Set No.1 is fitted in an all-over blue livery, while Set No.2 is fitted in the same livery but with the addition of a white line, much more similar to the 100 Series. After some delays, 300 Series Set No.1 began regular services on the 1st of August, followed by Set No.2 roughly one year later, on the 28th of July 2021.
As of today, both 300 Series sets are in regular service, being used interchangeably on all of Ohmi Railway’s three lines.
As all other Seibu 3000 Series trains were scrapped between 2013 and 2014, the two Ohmi Railway 300 Series sets are the sole “survivors” of this ill-fated series.

The eight intermediate cars surplus from conversion works were scrapped by Ohmi Railway after having been stripped of anything that could remotely serve as a replacement component, including doors, seats, bogeys, air conditioners and other equipment, practically leaving only the bare metal bodyshell.