Requested by Ayoub_05 via the TRSR form 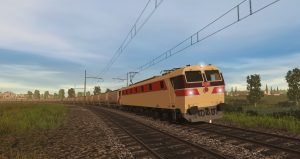 This class of 12 electric locomotives came to be in the early 1980s: with ONCF well satistified by the performance of the Japanese-made E1100 and E1200 Classes on heavy-haul phosphate freight trains, the company started to consider ordering similar locomotives to replace the unreliable french-built E900s and relatively lacklustre polish E1000s on high-speed InterCity passenger trains.

Thanks to the Japanese government granting a loan of 468 milion yen (at the time around 1,6 milion francs), ONCF was able to place an order for 12 electric locomotives to Hitachi, the Japanese company that had built the previous well-recieved E1100 and E1200 Classes.

These six-axle, 160Km/h-capable electric locomotives entered service in 1984 on fast Inter-City services between the main cities of Morocco, hauling the equally brand-new Eurofima and Corail-derived air-conditioned passenger coaches up to 160Km/h.

In more recent years, with the delivery of the french-built Class E1300 and E1400s, the E1250s were displaced from the top express trains in favour of their new counterparts, however, all twelve units are nonetheless still in service, hauling all sorts of passenger trains (and often some units are even re-assigned to top express services if a more modern locomotive is unavailable), being very well appreciated by Moroccan railwaymen for their comfort and reliability, altough a lack of spare parts has forced ONCF to reduce the maximium allowed speed of these locomotives from 160 to a still rather reasonable 140Km/h. Depsite these recent hiccups, ONCF has absolutely no plans to replace the E1250s, meaning that these nice locomotives will continue to run on moroccan rails for the forseeable future.