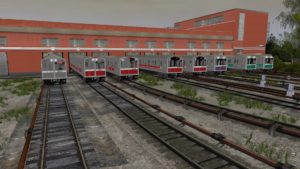 All the dependencies are either included in this package or are avaible on the DLS.

The consists avaible are:

A little bit of history…

Once the frenzy of the Expo’70 was over, the Osaka Municipal Subway thoroughly examined what where the needs of the newly expanded subway network.
One of the key issues was that the 30 Series, the alluminium trains wich were built as-fast-and-as-cheaply-as-possible to replace the pre-war stock, were already obsolete, depsite having been in service for less than a couple of years.

This was quite an issue, as those immediately became the mainstay of the subway fleet, and a full-scale replacement was out of question (mostly because you can’t simply ask the low-on-funds municipal government for more money to replace those brand-new trains you ordered yourself), but the ridership was booming, and the 30 Series was inadequate to handle such loads, especially on the Midosuji Line, Osaka’s first and busiest line.
The Osaka Municipal Subway was also comically lagging behind all of the other Japanese subways (primarily Tokyo’s TRTA), wich were starting to see the great results of years of work on the current chopper control.

Therefore, a new train was needed.

Introduced in 1973, the first prototype of the subway’s new trains was an all-motor-cars 4-car set originally classified as “20 Series”.
Based on the dimensions and layout of the all-network 30 Series and with the bodyshell based on the Sakaisuji Line 60 Series, it had several distinctive fetaures, such as a decorative fiberglass front frame, an asymmetrical cab layout and two top-center mounted headlights. It was also equipped with a finally-up-to-date current chopper control.
Starting from October, the prototype train was used on several trial runs mostly on the Tanimachi Line (and some also on the Chuo Line).

In 1974, the prototype train was lenghtened to 8 cars, repainted, re-classified as the “10 Series” (to avoid confusion with the Kitakyu 2000 Series) and transferred to the busy Midosuji Line, where it started normal with-passengers services, altough some issues with electromagnetic interferences with the chopper control limited it’s usage only to the Nakatsu to Tennoji section until February 1976. At the same time it was also retrofitted with air-conditioners, a first for the Osaka Subway.

By the late 1970s all the issues of the prototype train were solved, and a big order for the first full-production sets was placed.

… and a long lifespan.

The first full-production 10 Series trains were delivered in 1979 and entered service in the same year. They were a little modified and improved version of the prototype, mostly changing the headlights’ position and other small details.
A total of 234 vehicles was manufactured for almost 10 consecutive years, from 1979 to 1989 by Kawasaki, Nippon Sharyo, Hitachi, Tokyu Car Co. and Alna Koki. Initially formed in 8-car sets, from 1987 all of the Midosuji line trains were lenghtened to 9 cars, including the on-delivery 10 Series.
By 1989 a total of 26 sets was built, and the 10 Series finally managed to become the mainstay of the Midosuji Line, replacing most of the 30 Series (altough they weren’t fully replaced until 1995).

In 1998, the 10 Series started being refurbished: their chopper control was replaced with an IGBT-VVVF inverter, their interiors were renewed and their livery was changed, giving it a more modern look.
A very distinctive sticker was also applied to the front of refurbished trains, wich read “VVVF – 10 Series Car Rebirth“. The inverter refurbished cars are also sometimes called “10A Series”.

Those trains that did not immediately undergo the time-consuming and expensive traction control change were also renewed with the same livery (except for a few details) of the inverter ones, even if they kept the chopper control.
They were also given their own front stickers, wich read “ACCC – Armature Chopper Control Car”.

With the introduction of the 30000 Series in 2011, the oldest 10 Series trains started to be replaced, and as of today only two chopper controlled and 8 inverter-controlled trains remain in service out of 26 sets built.

A side effect of research.

After the 1973 oil crisis, the Osaka Municipal Subway came up with the idea of “miniaturizing” subway trains to contain the line construction costs. Serious research into this matter started in 1979, and will eventually led to the development of linear-motored subway lines, of wich the first line was the Nagahori-Tsurumi-Ryokuchi Line, opened in 1996, not casually, in Osaka.
Among the many things that were being researched to make a “miniaturized subway” practical, the inverter current control was one that interested the engineers the most, as it could be used in a variety of applications.

By the early 1980s, the standard-sized Chuo and Tanimachi Lines were becoming increasingly overcrowded, and Kintetsu railway was building it’s Keihanna Line too, wich was to connect and provide inter-running services with the Chuo Line.
As both lines’ fleet was composed by 30 Series and even older and more inadequate 3-door 50 Series trains, a new train in the style of the Midosuji Line 10 Seires was required, but as traction control technology was quickly evolving, Osaka Municipal Subway officials craved their own innovative train.

Based on (and largely identical to) the 10 Series, the new 20 Series trains were Japan’s first VVVF inverter-controlled mass-produced trains.
Built by Kinki Sharyo, Kawasaki, Hitachi and Tokyu Car Co., with the GTO-VVVF inverter manufactured by Hitachi and previously tested on 1100 Series cars surplus from the Yotsubashi and Sennichimae Lines, 16 6-car sets entered in service between 1984 and 1989 both on the Chuo Line (7 sets) and on the Tanimachi Line (9 sets), replacing most of the inadequate 50 Series trains.

By 1990, the Osaka Subway was finally getting along to replace the disliked 30 Series trains with an entirely new design, result of years of experience with the inverter-controlled 20 Series.
Not casually, these new trains were classified “New 20 Series”, and with their aereodynamic fronts and stainless steel bodies, replacing all of the remaining 30 and 50 Series trains on all third-rail powered lines.
With their electrical and traction equipment almost identical to the 20 Series, the New 20 Series quickly became the icon of the Osaka Subway, and still is to this day.

Fast forward to 2004, with the Kintetsu Keihanna’s extension from Ikoma to Gakken-Nara-Tomigaoka, the 20 Series underwent a refurbishment program similar to the one that the 10 Series underwent six years earlier (in fact the inverter was changed to the same IGBT-VVVF type used on refurbished 10 Series trains) and among other things, their max. speed was increased from 70 to 95 Km/h and they were retrofitted for one-man driver-only operation.

The refurbishment program was completed in 2006, with all 16 sets being renewed, including the 9 sets of the Tanimachi Line 20 Series, wich were transferred on the Chuo Line, joining the other seven 20 Series sets.

On 23 November 2018, Osaka was selected to host the 2025 International Exposition, wich will be located on Yumeshima, an artificial island in Osaka bay.
Like the preceding Expo ’70, the Osaka Subway will be once again the main people carrier to the Expo, wich will be served by a westward extension of the Chuo Line (Yumeshima is in fact located a couple of kilometers north-west of the line’s current western terminus of Cosmosquare).

To handle the influx of people, and to replace the old rolling stock, Osaka Metro announced that it will introduce a new train in 2022, the 40000 Series (altough there are still no concrete designs, the Asashi Shimbun newspaper did mention an order for 180 cars).
It’s easy to imagine wich will be the “victims” of this new train: the remaining 10 Series and especially the 20 Series trains, wich thus will end their service by the mid-2020s after an impeccable 40-year long career.

The 10 Series was originally intended to be used on New-York-style express serivces on the Tanimachi Line, but such services never came to fruition.

Altough the 20 Series was the first mass-produced inverter-controlled train in Japan it was neither the first in Japan (a place taken by the two 8200 Series tramcars of Kumamoto built in 1982) nor in the world.
World’s first inverter controlled train was the Finnish M100 Series of the Helsinki Metro, built by Vamlet-Stromberg in 1977 and entered service in 1984.