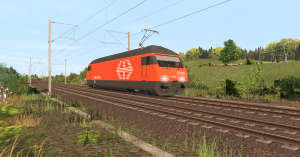 The story of the Re 460 begins in the mid-1980s, with the approval by the swiss people (via a referendum) of the ambitious “Rail 2000*” program, a large-scale modernization program intended to bring the swiss federal railways into the 21st century. The main objective of the Rail 2000 program was the reorganization of all services of the federal railways in order to create a fully integrated, clock-face scheduled system for the whole nation, a world’s first, mainly by adapting existing infrastructure, or building new ones in order to make running times as regular as possible and thus enabling quick, direct connections at so-called “node stations”.

Shortly after Rail 2000, another railway improvement program was approved by massive popular support via another referendum: the “NRLA**” (New Railway Link trough the Alps) project, wich consisted in the construction of new, faster and more direct railway lines trought the alps, manily by building new “base tunnels” to replace the existing “mid-height” Gotthard and Lotschberg tunnels, all in order to decrease the number of trucks (going from the north to the south of europe and vice-versa) clogging up the existing swiss motorways.

With the huge number of coming new lines, almost all to be built for a top speed of 200Km/h, the swiss federal railways were in need of new rolling stock, especially new electric locomotives, both to replace the ageing and inadequate 1920s-vintage Ae 3/6s in service on the Gotthard line and to operate services on the to-be built lines.

At the time, the SBB CFF FFS had just recieved their 7th and final batch of Re 4/4 IIs (later Re 420) locomotives, wich had been built almost non-stop for 21 years, between 1964 and 1985. Contemporary to the deliveries of the Re 4/4 IIs, SLM and BBC (two of the manufacturers of the Re 4/4 IIs) delivered four prototype locomotives to the SBB CFF FFS, classified as “Re 4/4 IV”. These were intended as test-beds for development of a new electrical locomotive suitable for high-speeds, something the Re 4/4 IIs were unsuitable for, due to their high weight and also overall obsolete conception.

The Re 4/4 IVs were a true step-up from the Re 4/4 IIs, thanks to their more modern conception and overall design. Their most notable improvement was the usage of a current chopper control (instead of an older resistor control), granting more power, a smoother accelleration and even an higher speed than the Re 4/4 IIs, depsite maintaining the same weight and lenght.

However, by the mid-1980s, the more advanced inverter control (with three-phase AC asynchronous motors) were becoming commonplace, thus the SBB CFF FFS decided not to proceed further with full-production of Re 4/4 IVs, opting instead, in an agreement with the manufacturers for a completely new design, devoid as much as possible of any influence from preceeding designs.

The design phase for the new locomotives informally started in 1987, right after the approval of the Rail 2000 program, with the SBB CFF FFS commissioning an evaluation study to SLM and BBC over the introduction of inverter-controlled locomotives. “Serious” design work stared soon after, with the federal railways ordering twelve units of the new “Re 4/4 V” from the SLM-BBC consortium***.

Their external design, made by the famous Italian Pininfarina design firm, gave the new locomotives a very modern look, whose main fetaure was the pleasantly rounded fronts. The overall design of the new locomotives also took full advantage of the loading gauge, resulting in a distinctively large-looking and imposing locomotive. For maximium aereodynamic effectiveness, as much equipment as possible was contained behind fairings, including the whole of the roof and underfoor equipment and also the pantographs as well, when they weren’t raised.

The sides of the bodyshells were made out of conventional steel, but the rounded fronts were made with a composite FRP-like material, wich granted good strenght and protection in case of crashes. The front window was also changed, from the conventional two “medium-sized” ones commonly found on older locomotives to a single, large one, granting an excellent visibility.

The driving cab was also a sort of ergonomics masterpiece, with the old-style “drivng desk” being ditched entirely in favour of driving control “panels” arranged like the armrests of an armchair, with the left-hand panel containing the braking controls and the right side panel containing the traction controls (master controller and speed setting lever), the latter of wich was movable, as it could swing to the right when the driver had to get out his seat, or left to “close” the driving position (see at 5:35 in the video below).

This unique and extremely comfortable driving position was the work of Emmerich Horvath, then a young university student, wich designed the whole cab arrangment with the imput and collaboration of several SBB CFF FFS drivers.

Finally, the new locomotives were fitted in a striking livery: “swiss red” for the bodyshell and dark grey paint on the lower part of the locomotive and on it’s roof. Completing the livery were a large SBB CFF FFS logo, a swiss cross encompassed between two arrows, painted on both sides in a “broken line” form (so to be “lighter” to one’s eyes) and a “2000” lettering on both fronts (in the same “broken line” style as the large logo on the sides), christening the new locomotives as an integral part of the Rail 2000 program with the name “Lok 2000”.****

The first completed Re 4/4 V (soon reclassified as Re 4/4 460) was delivered in 1991, beginning test runs in the same year. As with any new design, the Re 4/4 460s initially had some teething problems, primarily with the control software, such as the tendency to de-activate the regenerative braking for no apparent reason. After these first issues were solved, the first Re 4/4 460s finally began regular services with SBB CFF FFS around 1992.

Depsite being originally intended as universal locomotives, the Re 4/4 460s were initially all assigned to freight trains over the steep Gotthard pass, being gradually moved to passenger workings only from the mid-1990s onwards. Coinciding with the commencment of Re 4/4 460-hauled passenger services the SBB CFF FFS introduced dedicated cab cars for the EW IV series of coaches, with a design mirroring the locomotives’ one. However, the true breaktrough in the passenger services operated by the new Re 4/4 460s (soon after re-classified again to the current “Re 460”) came in 1997 with the introduction of the “IC2000” double-decker coaching sets, designed specifically for 200Km/h push-pull services with Re 460s.

With the Re 460s proving immensely popular with both railwaymen (due to their comfortable cab and docile driving), passengers and the railway company itself, the success of the locomotive was ensured, with the swiss BLS company and even foreign customers, such as Norway and Finland, ordering their own “Lok 2000″s.

One downside of the Re 460s was however their pricetag: as they were significantly more expensive than equivalent electric locomotives, their production ended with the 119 ordered units, and no further orders from the SBB CFF FFS were made (depsite SLM-ABB continuing to produce nearly identical locomotives for export to other countries).

By the early 2000s the 119 Re 460 units were contended between the newly-formed “Cargo” division of SBB CFF FFS and the federal railways “proper” passenger services. In the end, the “passenger” division won out, with “Cargo” acquiring the slightly cheaper Re 482 (Bombardier TRAXXs) instead. With this change, Re 460 freight services formally ended in the early 2000s, with all 119 units being reassinged to passenger services, the vast majority hauling the double-decker IC2000 sets.

As of today, all 119 Re460s are still in service, having become an iconic sight around almost all major swiss railway lines. After 20 years of service, almost all Re460s have run a distance equivalent to two-and-a-half times the circumference of the earth, and with the fleet being the backbone of SBB CFF FFS intercity services, the company decided to embark in a well deserved refurbishment program for the whole class, to be carried out by 2022 at the Yvedron-Lés-Bains works: the main modification will involve the replacement of the GTO-VVVF inverter with a more modern IGBT-VVVF type one, wich will make SBB CFF FFS save 27 GW/h over the whole fleet. As of July 2020, more than half the fleet was refurbished, with the whole program running precisely to schedule.

With the refurbishment works continuing, the SBB CFF FFS are planning to keep the Re 460s in service for atleast twenty more years, a true testment to this superb, universally liked locomotive, the true pinnacle of the Rail 2000 program.

The Re460 had a lot of “firsts” for switzerland, but also had a couple of very important “lasts”: it’s the last locomotive completely designed in switzerland and one of the very last “universal” (for both passenger and freight trains) locomotives designed in Europe.

For the 150th anniversary of the swiss railways, in 1997 a platinium-painted Re 460 locomotive was displayed in front of the swiss parliment building in Bern. 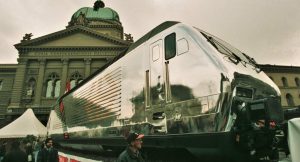 A segment from a 1994 episode of “Telescope”, an RTS (Radio Télévision Suisse, the federal broadcaster for the french-speaking part of Switzerland) TV program showcasing the then-brand new Re 460 and it’s fetaures.

An article (in Italian) from the SBB CFF FFS’ “news” website, detailing the early history of the locomotives and fetauring some early Pininfarina design sketches.

Yet more pininfarina design sketches avaible on this website.

*Also known as “Bahn 2000” or “Ferrovia 2000” in the German-speaking and Italian-speaking parts of Switzerland respectively.

***Shortly after, BBC would merge with the swedish ASEA to form the current ABB. This however had little to no influence on any existing projects, neither ASEA nor BBC’s ones.

****”Loc 2000″ in the French-speaking and Italian-speaking parts of Switzerland.