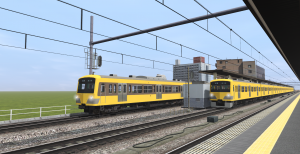 All the necessary dependencies are included in this .rar or are avaible on the DLS. Dependencies not mine belong to their respective authors.

By the early 1980s Seibu railway was still firmly anchored to a “traditional” rolling stock design concept, as with the exception of the chopper-controlled 2000 Series operating on the Shinjuku Line (wich had been made out of pure necessity), the most modern class of rolling stock operating on Seibu railway was the New 101 Series wich, depsite being still in production at the time, was nonetheless “born old” as it had the same basic conception of the older 101 Series from a decade earlier and even used copious design elements from older trains as well, all of this in a time when electric traction technology was quickly advancing. High energy consumption on the Ikebukuro Line was also an issue, and as the chopper-controlled 2000 Series trains already granting considerable energy savings on the Shinjuku Line (depsite their small number), Seibu railway finally decided to introduce an up-to-date new type of train on the Ikebukuro Line as well.

The new trains were intended to be used on all-stops local services on the Ikebukuro Line, with the company originally considering to introduce the 2000 Series “as it is” on the line as well; however, since the platforms at Ikebukuro station were already arranged (edge fences, track numbers, destination signs and other markings) for 3-door trains, Seibu railway decided to introduce yet another 3-door train.

Depsite not being the advanced trains originally intended to be in the initial design phases, the new trains weren’t entirely an another batch of the New 101 Series, as they nonetheless still had several improvements and design changes. Most importantly the new trains were fitted with the 2000 Series’ shunt-chopper control (wich, while being technically “inferior” to a full-chopper control was still superior than the New 101 Series’ resistor control), granting considerable energy savings and smoother accellerations. Other modifications were also made, with the most evident difference with the New 101 Series being in the passenger windows’ design and arrangement. Otherwise, the remaining equipment (such as the pantographs) was pretty standard among other Seibu trains.

The first, Tokyu-built, 3000 Series trains were sent into service immediately after their completion, commencing their regular services on the Ikebukuro Line directly in 1983. The 3000 Series was well recieved, with it’s smooth running and energy savings, a considerable improvement over the New 101 Series. However, by the late 1980s, after the final 3000 Series formation had been delivered, passenger congestion on the Ikebukuro Line had became so unbearably high that introduction of a 4-door train couldn’t be delayed any longer. After exceptionally good result of some testing with a 2000 Series on the Ikebukuro Line, Seibu Railway finally made the decision to introduce 4-door trains in 1988, with production of an improved version of the 2000 Series, the “New 2000 Series” being quickly started in the same year. The long-awaited four-door trains began services on the Ikebukuro Line in 1991, taking over the busiest rush-hour services from both the 3000 and New 101 Series. In the same year, the 4-door 6000 Series for Yurakucho Subway Line trough-services was also introduced in large numbers as well.

With the 3000 Series inadequate and obsolete 3-door arrangment, unsuitable for the heavy rush-hour loads, and the fast-paced introduction of 4-door trains, the 3000 Series quickly became a burden, being almost immediately relegated to off-peak services, with rush hour duties almost immediately taken over by 4-door rolling stock. Originally intended only for the Ikebukuro Line, starting from 1993 a few 3000 Series sets were moved to the Shinjuku Line to replace some of the older 101 Series sets.

At the time of their introduction, the 3000 Series trains were fitted with the then-standard Seibu Railway livery of canary yellow with a tan band around the passenger windows, like the New 101 Series from wich they derived. In 1999 this livery was simplified by getting rid of the tan window band, with the 3000 Series being returned into service in an all-over canary yellow livery (an identical livery modification was also made to the all the other trains that were fitted with it).

Unfortunately, other than the two Ohmi Railway sets, no 3000 Series cars have been preserved.