Requested by Pagroove on the Auran Trainz forums. 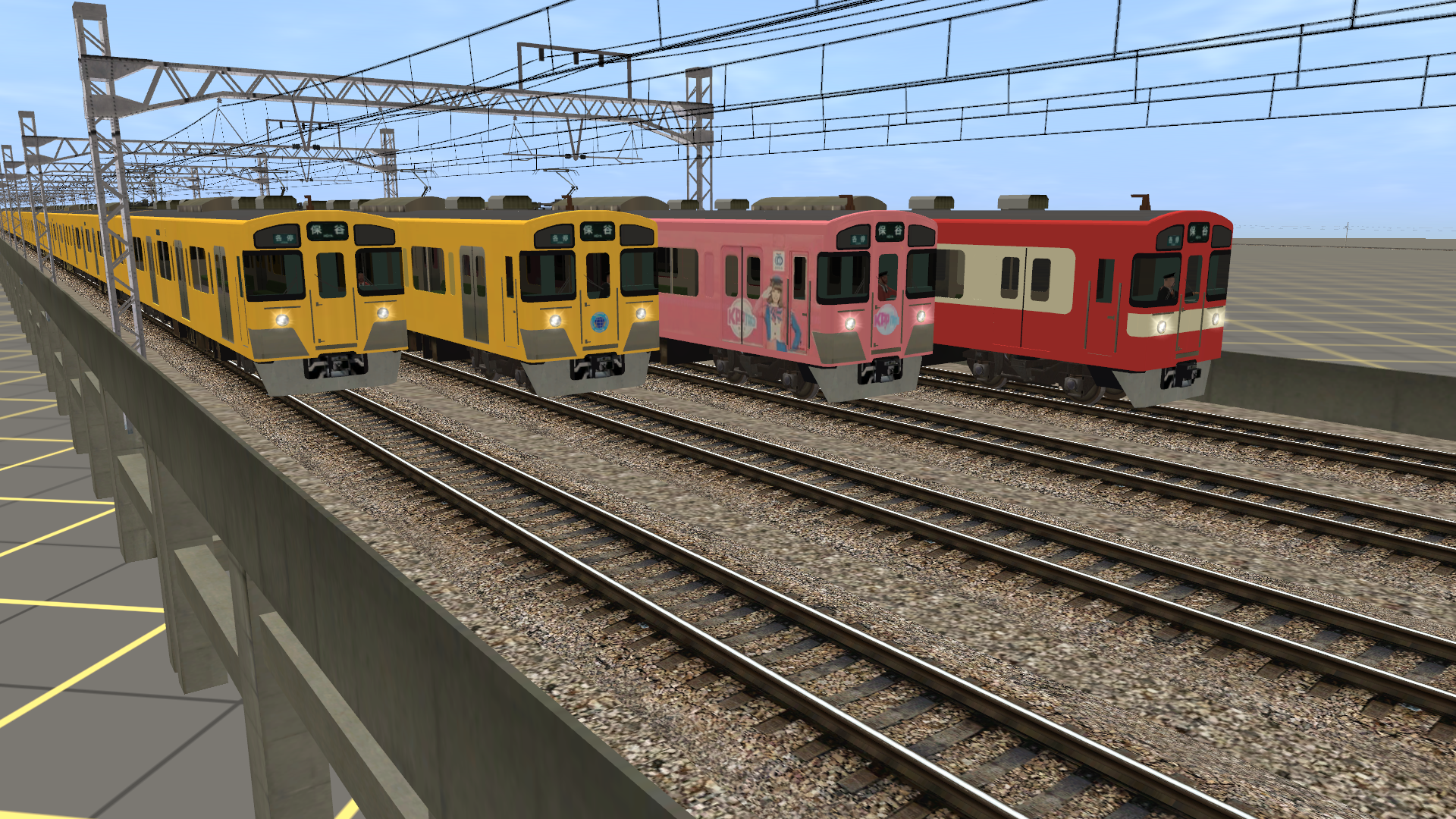 All the dependencies are either included in the pack or are avaible on the DLS.

We need more trains! And quickly!

The 9000 Series was introduced in 1993 to displace the last three-door trains (101, 301 and 3000 Series) from services on the increasingly overcrowded Ikebukuro Line. Seibu Railway’s own Tokorozawa Works built eight 10-car sets betwen 1993 and 1999.

The trains themselves were a real patchwork, as they were reusing bogeys, pantographs and traction equipment from scrapped 101 Series trains (1969), a bodyshell design identical to the later-batch (“New”) 2000 Series (1988) and interiors identical to those used by the 6000 Series (1992). They were also the last Seibu trains to be painted in the company’s iconic yellow colours.

A plethora of refurbishments…

Starting from 2004, the obsolete resistor control and DC traction motors inherited from the 101 Series trains was replaced by up-to-date IGBT-VVVF inverters and three-phase AC motors, with all 8 sets being converted by 2008.
In the same period, the 9000 Series trains were also refurbished, with air intakes being removed and door pocket windows obscured, altough with variations from set to set, as some kept the air intakes (and some still do as of today).
Initially, refurbished or converted trains were fitted with a blue round “renewal” sticker-headmark to distinguish them from non-refurbished sets, but as eventually all sets were refurbished, the stickers started to be removed (altough some trains still run with them to this day).

…And many special liveries

In May 2014, Keikyu railway painted one of it’s N1000 Series trains (set No.57) in a yellow liviery, dubbed “Keikyu Yellow Happy Train”, wich was coincidentally (or maybe not) very similar (including the gray doors) to the iconic one used on Seibu’s trains.

Seibu did of course notice, so in a bit of an “informal” (and later formal) collaboration, in July 2014, Seibu repainted 9000 Series set No.9 in a red and cream liviery identical to the iconic Keikyu railway’s one, dubbed “Seibu Red Lucky Train”.
As of today 9000 Series set No.3 still carries it’s special liviery, as Keikyu N1000 Series set No.57 does too.

Later on, in June 2016, 9000 Series set No.1 was repainted in a special pink liviery with vinyl decorations as a celebration of both the 100th anniversary of Seibu railway and (mainly) the fifth anniversary of the career debut of J-Pop singer Kyaru Pamyu Pamyu (whose real name is Takemura Kiriko), to wich the train is themed to, with Kyaru herself posing as “honorary conductor” for the train’s first run (on the 4th of June).
Set No.1 ran with the special KPP liviery until the 29th of September, when the vinyl decorations were removed, but the pink liviery was left, wich set No.1 carried until it’s retirement and scrapping in March 2018.

Also in 2016, set No.8 was repainted in a dark-blue “Seibu Lions” (a professional baseball team owned by Seibu railway itself). Service with the special liviery started in January 2017 and ended in March 2019, when set No.8 was repainted in the standard Yellow.
This is the only 9000 Series liviery not included in the pack, as i couldn’t find appropriate textures. I may make it in the future.

Trivia:
The Ikebukuro line was specifically chosen to run a KPP-themed train because it passes trough Nishi-Tokyo, the city (more like a “metropolitan municipality”) where Kyaru was born.