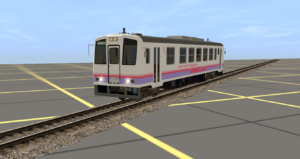 In 1989, the final iteration of the first-generation NDCs entered service: the KT-100 and KT-200 Serieses for the Kumagawa Railway and the TR-100 and TR-200 Serieses for the Takachiho Railway.
These were largely identical to the earlier Matsuura Railway MR-100 Series, with the most notable difference being the addition of two top-mounted fog headlights.

The Takachiho Railway TK-100s and TK-200s followed a similar system, with the -100 series being intended for regular services and the -200s being intended for tourist services. Both serieses entered service in April 1989, following the handover of the Takachiho Line from JR Kyushu.
Unfortunately, like most other rural railway lines, suffered from a very low ridership, and the line was threatened with closure several times. The coup the grace for the line arrived in 2005, when Typhoon Nabi severely damaged the line, washing away several bridges. Due to the tremendous amount of work and money needed to re-open the line, wich wasn’t justified by the line’s fleeble ridership, the railway was officially closed that year.

Of the five TK-100s and the two TK-200s, one (n°TK-201) was donated free-of-charge to the Asa Kaigan Railway in Shikoku, units TK-104 and TK-105 have been statically preserved at Hinokage Onsen station, and units TK-101 and TK-202 have been preserved (dinamically) at Takachiko Station.
Either of the latter two units are avaible for a “driver experience” – you drive one of the two railcars for about 30 minutes (with the assistance of a former driver) at the cost of 10000 yen per person. The only requirement is a driving license (anything goes: car, motorbike, moped…)
All the remaining units were scrapped.