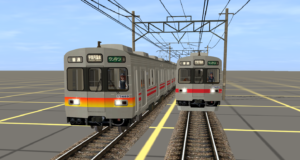 …and far away too!

Also in the same period, the Toyama Chiho Railway in Toyama Prefecture needed more trains, both to replace an older train damaged by a fire and to provide more capacity ahead of the Hokuriku Shinkansen extension to Toyama.
“Chitetsu” bought four former Oimachi Line 8590 Series cars, wich were reformed into two 2-car sets, converted to one-man operation and reclassified “17480 Series”, using the railway’s unique numbering scheme.
Still fitted into their Oimachi Line livery, they entered service in 2013 on the company’s lines, wich were followed by two more 2-car sets (formed of former Denentoshi Line cars) in 2019; these too retained their Tokyu-era livery (including the “K” sticker).