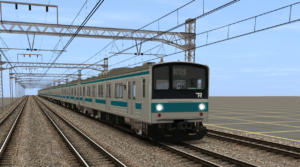 In the early episodes of Detective Conan (from the first ones in 1996 up to the late 1990s), 205 Series trains operated by “TR” on the fictional “Toto* Loop Line” were commonly used to depict real-life JR East Tokyo Area lines, primarily the Yamanote Line, but also the Saikyo, Keihin-Tohoku and Chuo-Sobu Lines.

Eventually, as the series popularity grew (and so did it’s budget), real-life locations (and railways) replaced fictious ones, and by the mid-2000s, with some exceptions, Detective Conan fully transitioned to real, existing trains, such as the Ida Line 119 Series depicted in episode 517 (10th November 2008).

* To in japanese can mean (among other things) both “eastern” (東) and “city” (都); therefore “Toto” means “Eastern City”, a semi-play on the “Tokyo” (東京) name, wich means “Eastern Capital”.