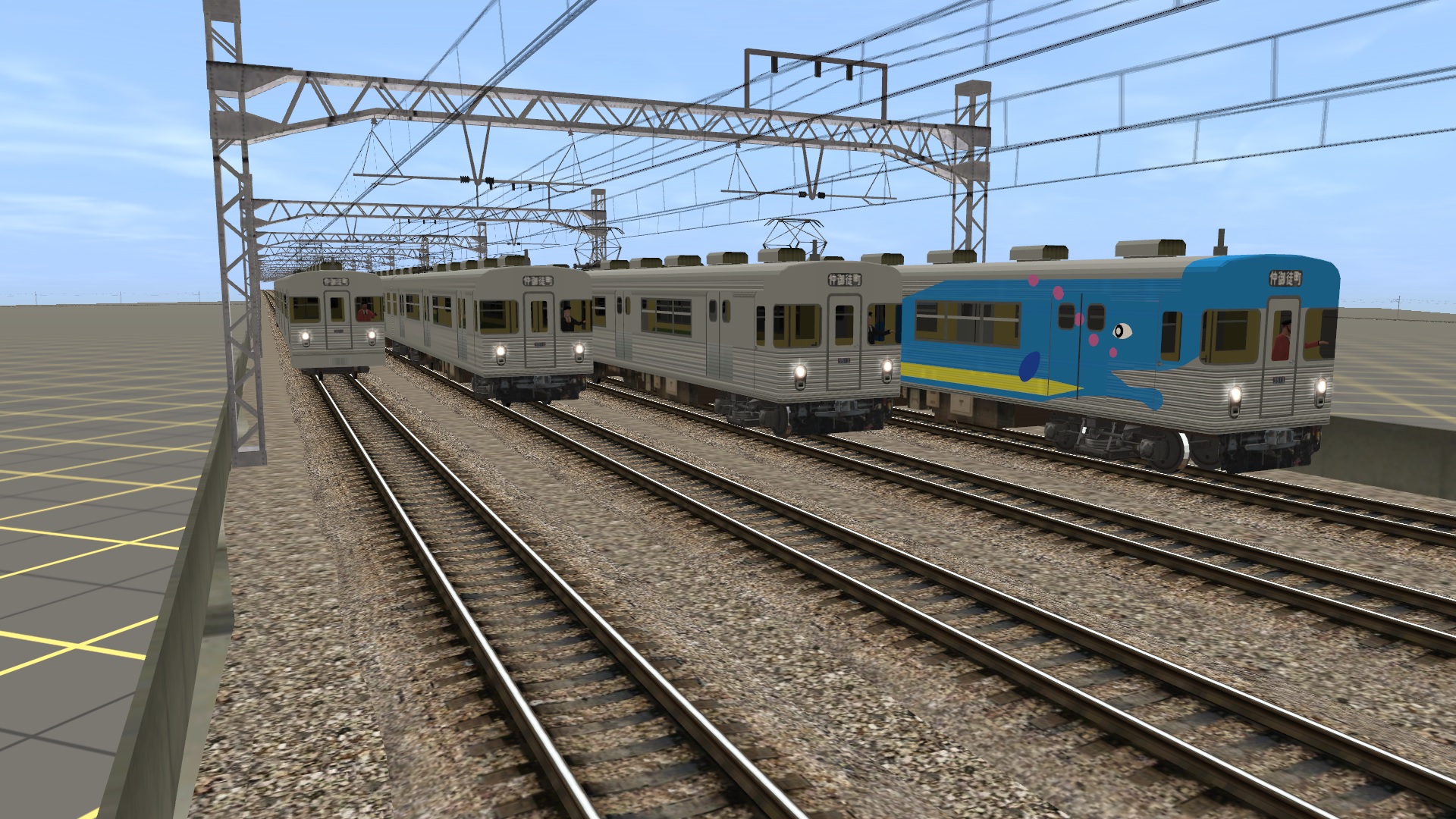 All the necessary dependencies are either included in this package or are avaible on the DLS, except the pantographs, wich must be downloaded from Rizky_Adiputra’s Website (JIRCtrainz.com – they’re included in the “Freeware EMU packs”)

Tokyo is modernizing itself…

In the late 1950s, at the beginning of the Japanese “economic miracle” (a period of fenomenal economic growth that lasted from the early 1950s to the “bubble burst” of the early 1990s), Tokyo’s re-construction from world war devastation was completed, and the rapidly growing metropolis sought to improve and modernize it’s pubblic transport infrastructure (especially as the summer olympics of 1964 draw nearer each year), wich was then composed of the overcrowded and dilapdated JNR lines (wich ran ageing pre-war and sub-standard wartime stock – the 103 Series came only in 1963), and Tokyo’s equally overcrowded and inadequate tramways.

The key part of this modernization plan were subway lines, wich (unlike those that came before) were to connect and provide trough-services with the numerous private railway companies wich were barred from building tracks inside the Yamanote Line loop due to a law of the 1920s (wich is still in effect today).

An heated debate and the birth of a “rival” company…

A master plan was drawn by the Ministry of Transport, wich included most of modern-day subway lines (up to Line 7 – the Namboku Line, wich wasn’t built until 1991) in a very primitive form (their alignment was changed several times in the following decades).
Of the lines drawn in the masterplan, two were deemed of immediate importance: Line 1 (designed to connect the Keisei and the Keikyu networks) and Line 2 (designed to connect the Tobu and the Tokyu railway network).

TRTA (Teito Raipd Transit Authority, the government-controlled company operating the Tokyo Subway) accepted to build Line 2, but not Line 1, on the grounds that the two were largely parallel lines (wich in fact was true), thus the Tokyo Metropolitan Government stepped in, creating it’s own subway company, TMGBT (Tokyo Metropolitan Government – Bureau of Transportation, better known as Toei Subway), wich was to build Line 1.

With the opening of the new line, new rolling stock was introduced: the 3000 Series.

A far cry from it’s predecessors, it was TRTA’s first catenary-fed train, first 1067mm-gauge train and the first to use stainless steel. It also used air suspensions and an advanced resistor control system with automatic-shunting intermediate positions. Nonetheless, it was also to be the last TRTA train with 3-doors and 18-meters long cars.
Their high power and lightweight construction, gave them an extremely fast accelleration: 4Km/h per second, rivaled only by the famed Hanshin railway “Jet cars” (also at 4Km/h/s).

Their streamlined, flat-yet-curved-at-the-top front, gave them the nickname of “Whales”.

As the first Hibiya Line section was quite short and not yet connected to the Tobu network, ridership was low, thus the first 3000 Series trains operated in 2-car sets.

In May 1962, as the section between Minami-Senju and Kita-Senju opened, the 3000 Series trains were lenghtened to 4 cars, and trough-service with the Tobu Iseaki Line began.

The front cars were originally fitted with front skirts, interestingly enough, whitout couplers. This obiviously proved to be quite a great hassle, so by December 1963 the skirt was removed from all trains.

A last sprint before the Olympics…

At the beginning of 1964, the olimpic year, the Hibiya Line was not yet complete, so construction was greatly accelerated: on the 25th of March, the section between Ebisu and Kasumigaseki opened. This section was not connected to the rest of the Hibiya Line, as the section between Kasumigaseki and Higashi-Ginza wasn’t completed yet. On the 25th of July, the un-connected section was extended westwards to the current terminus of Naka-Meguro, and on the 29th of August, the last section of the Hibiya Line between Kasumigaseki and Higashi-Ginza was opened and Tokyu Toyoko Line trough-services began; at the same time, the 3000 Series trains were lenghtened to 6 cars.

The Hibiya Line was completed just weeks before the olympics, and this was a great achievement for TRTA, especially considering that the “rival” Asakusa Line (the Line No.1 of TMGBT) could not be completed in time for the olympics, and would terminate at Shimbashi for the whole duration of the games (in fact, the Asakusa Line did not reach Sengakuji, the connection with the Keikyu network until 1968).

…and a trouble-free career…

By the 1970s, TRTA was facing the issue of kids getting their fingers trapped in the train doors’ pocket: the standard situation would be a small kid looking out of the door window (with the hands pressed against it), and when the train would enter a station, the doors would open, driving the unfortunate kid’s finger into the door pocket, where they got trapped.
TRTA devised a simple yet ingegnous solution: reducing the door windows by eliminating their lower half, thus forcing the kids to look out from the standard windows.
Initially experimented on the Marunouchi Line 500 Series trains, al of the Hibiya Line 3000 Series trains were retrofitted with small windows by 1971.
This peculiar window arrangment was used in all subsequent trains built for TRTA until the 1980s, and JNR adopted a similar solution for their 201, 203 and early-production 205 Series trains.

Also in 1971, with the increase in ridership, the 3000 Series trains were lenghtened again to 8 cars. Sometimes, 4+4 car trains also ran.

…plus a “secret life” as an experimental train!

The TRTA 3000 Series was used also to experiment new technologies, such an advanced ATC equipment, chopper control (in 1966) and ATO: Automatic Train Operation.
A Semi-automatic ATO (the driver presses a button and the train drives itself until the next station) of the older analogue type was trialed occasionally on the Hibiya Line starting from 1961 (only on certain sections), and by the 1970s, there were a few service runs by the passengers. It’s unknown exactly when ATO equipment was removed, but it was used until atleast 1987.

The end of a remarkable career.

By the mid 1980s, the 3000 Series were neither old nor inadequate, but were surely outdated, espeically considering all the subway (and railway) technology improvements of the time, so TRTA sought to replace them.

Their replacement would be the 03 Series, part of the superb “0X” family of trains, TRTA’s masterpice regarding rolling stock (nonetheless, they were air-conditioned too), with the 01 and 02 Series already replacing the 2000 and 500 Series of the Ginza and Marunouchi Line respectively at the same time.

The 03 Series was introduced in 1988, gradually replacing the 3000 Series. In the early 1990s, only 5 3000 Series sets were still in service, used only during the morning and evening rush hours, supporting the newer stock.
On the 23 of July 1994, the 3000 Series ran for the last time on the Hibiya Line, with the front cars painted with a cute blue whale, a reference to the trains’ nickname.

Trivia#1
Originally, the cabs of the 3000 Series trains were fitted with “horizontal” speedometeres, similar to those used on the 0 Series Shinkansen. They were replaced by the conventional “rotary” type by 1976.

Trivia#2
Originally, the “3000” series definition applied only to the cab cars, as the intermediate cars were known as the 4000 Series, using a system similar to the one used for the Ginza and Marunouchi Line rolling stock.
The definition of “X000” series for the whole train came only with the first 5000 Series trains of the Tozai Line, introduced in 1964.