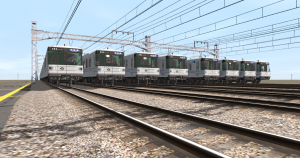 The 03 Series was introduced in 1988 and was until very recently, when it was replaced by the 13000 Series, the “icon” of the Hibiya Subway Line.

By the late 1980s, the TRTA was planning for a replacement of the 3000 Series, wich had been introduced in 1961, when the line opened. Original plans called for the introduction of a new train on the Hibiya Line by 1990, when the 3000 Series would’ve passed the 30-year mark, but as the 3000 Series was already showing signs of precociuous fatigue and tear, due to their intensive usage, TRTA decided to anticipate by the introduction of new trains by two years, from 1990 to 1988, the then-current year.

This sudden change of schedule meant that to meet the deadline, the new trains, designated the “03 Series” had to be designed as quickly as possible. As such, the 03 Series was closely based on the in-production 01 Series for the Ginza Line and on the 05 Series for the Tozai Line. From the former, the 03 Series inherited the alluminium bodyshell construction and layout, while from the latter, the 03 Series inherited almost the entirety of the technical equipments: traction motors, traction control (a very distinctive Mitsubishi Electric four-quadrant GTO Chopper), pantographs, air compressors and so on…

The exterior design was partly based on the earlier 3000 Series, with the new trains keeping the iconic wrap-around windows and the generally-rounded shape of the front. According to official TRTA documents, the main themes of the exterior design of the 03 Series were “High Quality” and “Adult Sense” (whatever it might mean…).

Rushed into service to meet the deadline, the 03 Series finally began revenue runs on the 1st of July 1988, and thanks to a bit of luck (considering how rushed was the designing phase), without any particular problems or technical issues.

The quirky five-door cars were introduced in 1990 as an attempt to reduce the line’s congestion by speeding-up boarding and alighting at stations. The bodyshell of these cars doesn’t change substantially from the other “standard” 03 Series sets with three doors only, and the seats between doors were kept fixed (altough reduced in lenght to just space for 3 people), unlike the similar and infamous 6-doors “cattle-cars” of JR East stock (such as the 205 Series), where during rush hours, seats on these cars were folded up.
Furthemore, if all five doors weren’t needed, such as during off-peak hours, conductors could choose to open only the three “standard” doors, leaving the two “extra” ones closed.

This five-door system was also used by Tobu Railway on it’s 20050 Series, wich ran trough-services on the Hibiya Line.

Speaking of trough services, one of the main issues with the 3000 Series was that not all sets were fitted with the necessary equipment for trough-services on the Tokyu Toyoko Line (from the southern Naka-Meguro end) and on the Tobu Iseaki Line (from the northern Kita-Senju end): some sets of the 3000 Series were fitted only with Tokyu’s ATS, some only with Tobu’s ATS, some with both and some even with none at all!
To solve this problem, all 03 Series were fitted with both ATS systems right from the start (and also obiviously with TRTA’s WS-ATC system for the Hibiya Line).

As mentioned before, the 03 Series entered service on the 1st of July 1988, without any problems, completely replacing the fatigued and increasingly worn-out 3000 Series on the 22nd of July 1994, when the last of the old trains made it’s final run.

One year later, on the 20th of March 1995, the TRTA subway was hit by a terrorist attack by the Aum Shinrinkyo religious cult, wich relased sarin gas (a powerful and lethal nerve agent) on five subway trains during rush hour.

Three lines were targeted: the Chiyoda Line (one train), the Marunouchi Line (two trains) and the Hibiya Line (two trains), with the objective being Kasumigaseki station, where the headquarters of the National Police Agency were located: the attack was in fact a (thinly veiled) attempt at diverting the Police’s investigation into the cult activities (wich included weapons smuggling, murder, chemical weapon manufacturing, money laundering and so on).

One of the two Hibiya Line trains struck by the terrorists, train number A720S, a southbound service from Kita-Senju to Naka-Meguro, was run by a 03 Series, set no.10 (one of the five-door car ones), wich made an emergency stop at Tsukiji Station.
In total, as a result of the attack, 13 people died (of wich six on the 03 Series alone), and 2475 were seriously injured.

Tragedy struck again the 03 Series five years later, on the 8th of March 2000, when set 02, running the southbound A816S service approaching it’s terminus of Naka-Meguro, due to the uneven weight distribution of passengers, derailed on the ramp on the approach to the station, and struck the oncoming northbound B801T service, a Tobu Railway 20000 Series set, whose left side was scraped away, killing five people onboard.

After this tragic and tumultuous period, the 03 Series enjoyed a relative tranquilness; meanwhile, TRTA was restructured into “Tokyo Metro” in 2004, with the 03 Series subsequently losing the iconic “S-arrow” logos in favor of the light blue “M-harts” of the new “Metro”.

Until 2013, Hibiya Line trains used to have inter-running services on both ends: on the south end with Tokyu’s Toyoko Line and on the northen end with Tobu’s Iseaki (and later “Skytree”) Line. This changed in 2013, with the opening of the Fukutoshin Line, with Hibiya line trough-services south of Naka-Meguro being curtailed in favour of the new line.

As the 03 Series eventually started reaching the 30 years mark, in 2017 it’s successor was introduced by Tokyo Metro: the 13000 Series.
Unlike previous Hibiya Line stock, wich was 18m in lenght, the 13000 Series used the standard 20m-long bodyshell common to almost all other subway lines. This change (wich also required a few adjustments to the line’s loading gauge) was made to simplify the fitting of platform screen doors at Hibiya Line stations.

The introduction of the 13000 Series was swift, and by 2020, the remaining 03 Series sets were relegated to off-peak less-important duties. The last 03 Series set was taken out of service on the 28th of February 2020, without any of the fanfare or last run “ceremonies” commonplace with all the other retiring stock.

Specifically, this was done to avoid (according to a Tokyo Metro press relase) “the repeating of the inconvenience caused by railway enthusiasts during the farewell run of the 6000 Series”.
(apparently, two years earlier, a group of “hardcore tetsus” were recorded chanting “Long Live the glorious TRTA! Down with the Metro!” onboard the retiring 6000 Series, and apparently, Tokyo Metro didn’t took it too well…)

Only 10 months passed between TRTA’s decision to anticipate the introduction of new stock on the Hibiya Line and the entry in regular service of the 03 Series. Quite a feat, considering that all of the designing, construction of the first set, testing and training had to be done within less than a year.