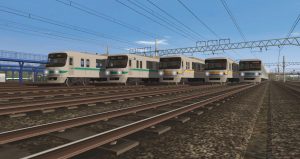 Both the 06 and 07 Serieses were introduced in the early 1990s in order to increase capacity on two lines opened roughly twenty years earlier, the Chiyoda Line of 1971 and the Yurakucho Line of 1974, especially the latter, wich depsite having reached it’s current lenght in 1988 with the extension to Shin-Kiba, was in need for new trains to operate the soon-to-open trough-services with the Seibu Ikebukuro Line, via the “Yurakucho New Line” (wich will become the Fukutoshin Line in 2008).

Depsite the rolling stock of both lines, the 6000 and 7000 Serieses, was still fairly modern for the early 1990s, TRTA opted not to contine their production (the last trains of both series had been delivered only a few years earlier – in 1990 and 1989 respectively), as their basic design was now 20 years old, and in some aspects even relatively outdated. Instead, the company decided to introduce an entirely new train for both lines.

Classified as “06 Series” for the Chiyoda Line and “07 Series” for the Yurakucho Line, they were manufactured by Kawasaki Heavy Industries in 1992, with both serieses entering in service on their respective lines on the 18th of March 1993.

The pleasant apperance of these new trains, with their 14° angled curved front and the round headlights, perhaps their most distinctive fetaure, was the result of a well tought-out design effort encompassing nearly all aspects of the exterior and the passenger interior, under the guise of a “Gentle & Mild” appearance (according to TRTA’s official documents), with the overall design concept being “to be gentle, elegant and recognizable with the passengers for a long time” and to “take care of all people (passengers and TRTA railwaymen too) as well as the environment”. In short, it was to be TRTA’s train “to the 21st century”.

But besides the design, these new trains fetaured countless technical advancements, such as their alluminium-alloy bodyshell construction (derived and perfected from the Ginza Line 01 Series’ one), new energy-saving new air-conditioners, LED destination indicators (in a time where roller-blind ones were still extremely common) a computerized TIS self-diagnostic system and most importantly, the ground-breaking adoption of Toshiba-made IGBT-VVVF inverters (wich will become commonplace only a decade later!) thus making them probably among the very first trains using this traction control system in the world, and surely the first ones to run regular services!

Both serieses were essentially identical, sharing the same bodyshell and traction equipment. The only few differences concerned the different saftey equipment installed (CS-ATC for TRTA and JR East and OM-ATS for Odakyu on the 06 Series and CS-ATC for TRTA, Seibu ATS for Seibu and Tobu ATS for Tobu on the 07 Series), some interior details and, the livery, wich depsite being similar in appearance, actually has a different pattern between the 06 and 07 Serieses. Of course, the main colors were the Chiyoda Line’s green for the 06 Series and the Yurakucho Line’s yellow for the 07 Series, with the addition of a thin white line and an additional decorative line (purple on the 06s, blue on the 07s).

In order to increase the comfort of the driver and conductors as well, the cab area was enlarged by around a meter at the expense of the passenger compartment (to remain within the 20m standard car lenght), thus during the desing phase, TRTA decided to completely re-arrange seating and passenger door placement compared to existing rolling stock: a “4-6-7-6-4” seating arrangment instead of the long-standing “3-7-7-7-3” standard, wich had been in use since the 1960s.

Both serieses were immediately well recieved by both railwaymen (wich appreciated their spacious cab and excellent visibility) and passenger as well, thanks to their interior comfort and air conditioning. After their succesful launch, the seven sets (one 06 Series set and six 07 Series ones) went on to live a relatively uneventful life. The first major change for these trains came in 2004 with the restructuration of TRTA into the current Tokyo Metro, and as such the two serieses (along with the rest of the subway’s fleet) had their TRTA “S-arrow” logos removed and replaced by Tokyo Metro’s “M-heart” stickers.

However, an insidious issue quickly came to light with these trains: their non-standard door placement conflicted with the installation of platform edge gates! Something that had not been an issues durig the times of TRTA (where the only line to be equipped as such being the Namboku Line), however Tokyo Metro intended to fit platform gates to all it’s stations, starting from the under-construction Fukutoshin Line, wich was to absorb the existing Yurakucho New Line and was planned to share it’s rolling stock fleet with the Yurakucho Line. As such, the platform screen doors were designed to be compatible with “standard door spacing” trains (such as the 7000 Series), wich were the vast majority of trains in service on the Yurakucho Line (and the rest of the Tokyo Metro network).

At the same time, Tokyo Metro was also getting around to replace the last surviving 5000 Series sets on the Tozai Line, wich had managed not to get replaced by the 05 Series (or the 05N Series) until then. As such, to solve two problems at once, Tokyo Metro decided to transfer the six 07 Series trains on the Tozai Lines. These transfer started in summer 2006 with the introduction of the 10000 Series, wich started replacing the 07 Series on a train-per-train basis.

The first 07 Series entered service on the Tozai Line on the 1st of September 2006, and fetaured a few small modifications to be compatible with it’s “new home line”: the Seibu and Tobu ATS equipment was replaced by JR East’s one (enabling these trains to run trough-services on the JR Chuo-Sobu Line from both ends), the automatic announcment system was changed to the Tozai Line (using the same ROM as the 05 Series) and the livery was of course changed to the Tozai Line’s light blue colour. By March 2007 four 07 Series sets (07-103, 07-104, 07-105 and 07-106, the second-batch Nippon-Sharyo built ones) had been moved to the Tozai Line, enough to replace the last surviving 5000 Series sets, wich were retired on the 17th of March.

The other two sets, 07-101 and 07-102 were retired from Yurakucho Line duties at around the same time and were stored out-of-service at Shin-Kiba depot, awaiting the necessary modifications to be transferred to the Tozai Line.
In September 2008, in a strange turn of events, 07 Series set 07-101 re-entered service (painted in the Tozai Line’s livery) however not on the Tozai Line, nor on the Yurakucho Line: it was temporarily allocated to the Chiyoda Line as a stop-gap mesaure to replace 6000 Series sets that were unavaible, as they were undergoing works to install JR East’s new digital radio (wich is required for Joban Line trough-services). Set 07-101 operated on the Chiyoda Line for a few months only, until December 2008, when it was finally transferred to the Tozai Line, togheter with the other set, 07-102.

After being removed from service, Tokyo Metro decided not to transfer it to the Tozai Line (where the six similar 07 Series were in service) and instead had it towed to Shin-Kiba depot in 2015 and scrapped there, with nothing of the set being preserved.

Currently, out of the two series, only the six 07 Series sets are in service, all on the Tozai Line. In another bizarre turn of events, all trains survived the installations of platform screen doors on the Tozai Line depsite their non-standard door spacing (wich had been the main reason for removal from the Yurakucho Line), as the Tozai Line had to be fitted with special “wide” gates to adapt to the 2m-wide “wide door trains” of the 05 and 15000 Series, and thus the 07 Series’ doors no longer interfered!

Trivia #1:
The interiors of the 06 Series had a flooring pattern inspired by traditional Japanese rock gardens and the places of Nippori, Chiyoda, Asakasa and Jingu-Mae, wich the Chiyoda Line passed through, and was intended to convey a “calm and tranquil atmosphere”, while the 07 Series had interiors designed to convery a “lively and elegant atmosphere”, with their seat upholstery being inspired by Cezanne’s impressionist paintings.

Trivia #2:
Depsite the ground breaking technologies and the cutting-edge design used on these trains, their control desks stuck out like a sore thumb: on the modern brown-colored frame (of the same type as used on the Namboku Line 9000 Series) the main controls consisted of a “vertical axis” brake and master controller lever, with this latter one being nearly identical to the ones used since the 1960s on JNR rolling stock!
This wasn’t casual – as it was commonplace in the 1980s and 1990s, the control arrangment of these new trains was designed to be as similar as possible to earlier rolling stock on the same line, to facilitate the drivers of the different companies that had to drive these, to acquaint themselves with the new trains. As such, for example on the Chiyoda Line, you could have trains from a time range of around 30 years (the 6000 Series of 1971, JR East’s 203 Series of 1982 and the 06 Series of 1992) all using the same driving controls arrangment, wich in turn was based on the one used on 103 Series trains of 1963*.

Trivia #5:
Set 07-101 bears the distinction of being the only Tokyo Metro (and by extension of the whole Tokyo Subway, including Toei lines) to have operated in revenue services on three different lines: the Yurakucho Line (1992 to 2007), the Chiyoda Line (September-December 2008) and the Tozai Line (December 2008 to Today).

Trivia #6:
Since the Yurakucho and Tozai Lines are not phisically connected, 07 Series trains to be transferred from one line to the other had to take a slightly circuitous route: first they had to be taken to Ayase station (via a connecting track between the Chiyoda and Yurakucho Lines, located near Kasumigaseki station) and then had to be hauled by a JR Freight locomotive on the Musashino Line to the Tozai Line’s Fukugawa Depot.

Trivia #7:
In a strange turn of events for the 06 Series, what could’ve been a worthy replacement for the 6000 Series was instead outlived by it’s predecessors by three years, as the last 6000 Seres set was retired in 2018

Meta-Trivia #1:
At “Seven Trivia points”, this is the current holder of “most-trivia-ed” pack ever made by me, beating the previous record holder (the JNR DD54 diesel locomotives) by two points.

Bonus Image(s): Some early design sketches and concepts for the 06 and 07 Serieses: 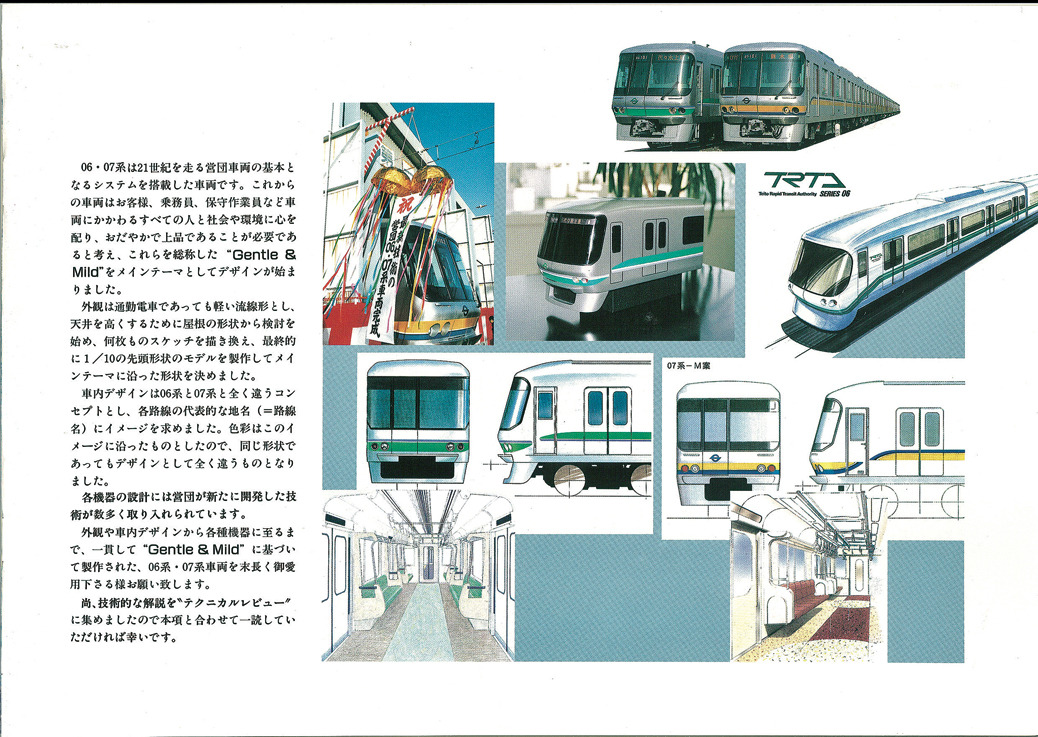 In these sketches instead the general appearance is almost definitive – only the livery is different. 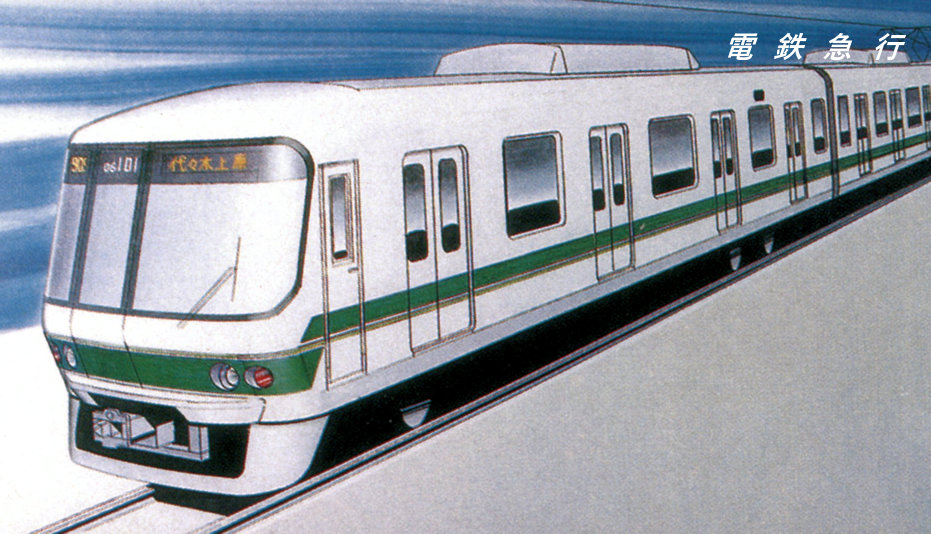 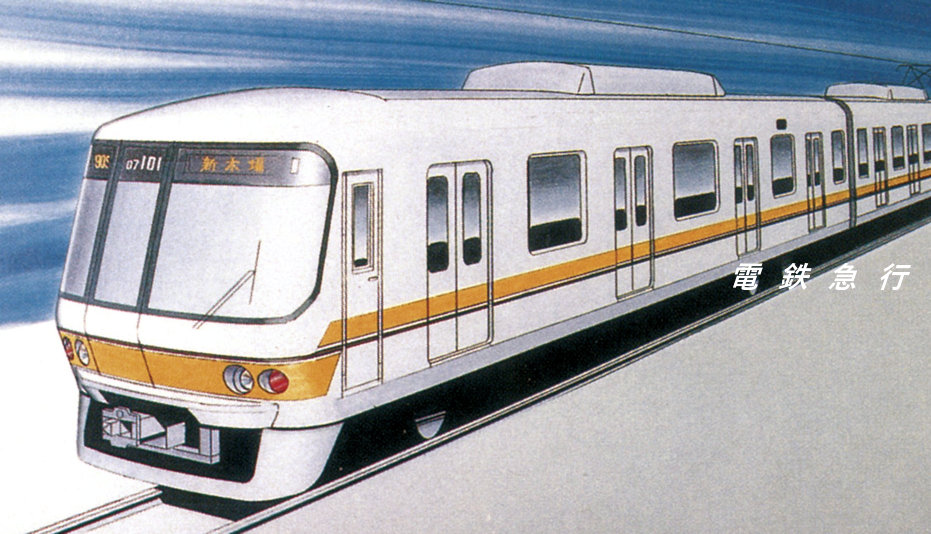