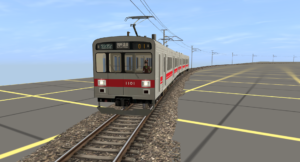 The first buyer of the 1000 Series was Ueda Electric Railway (a subsidiary of Tokyu itself), wich bought four 2-car sets converted from KuHa cars in 2008. Re-numbered (not really) as the “1000 Series”, they entered service in the same year, keeping Tokyu’s red livery. Set No.4 was later repainted into a blue-white revival livery carried by older “Marumado” (“Circle Windows”) MoHa 5250 Series trains (wich, by the way, are avaible for trainz: keimei made them a while ago).