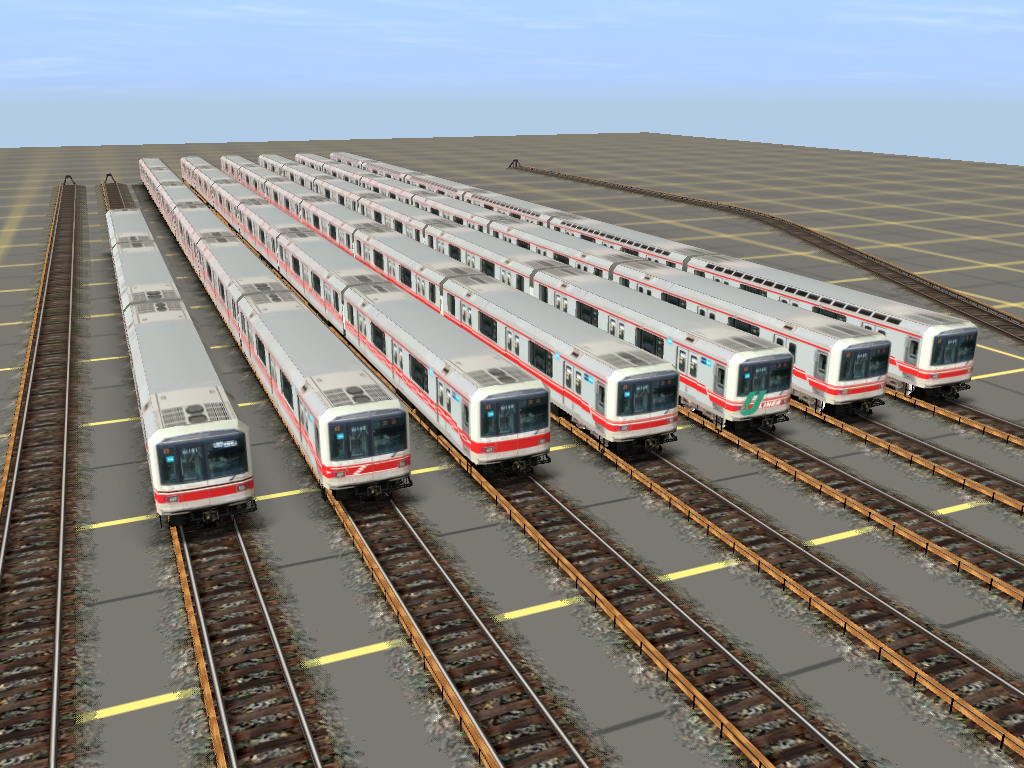 This is a reskin of Rizky’s 01 Series. The original model is not avaible anymore, so please download the Tokyu 5000 Series from the “Tokyo Subway Pack” instead, as it uses the same dependencies.

All the necessary dependencies are included in this package, avaible on the DLS or from Rizky’s website
Reskinned with permission.

In the mid 1980s, the Maronouchi line was in a similar situation to the Ginza line, with it’s stock dating between 1954 and 1957, thus more than 30 years old, and above all, it was obsolete and inadequate to the quickly rising ridership on the line.

Named the “02 Series”, it shared bogeys, traction control equipment and motors, and like the early Ginza Line sets, these too were not equipped with air condtitioning until 1990-95, so they were similarly fitted with provisional air intakes.

The newly introduced 02 Series was, again, well recieved by both passengers and crews.
The replacement of older stock (300 and 500 series stock from 1954 and 1957) took less time than on the Ginza Line, with all old trains being retired between the early and the mid-1990s, with the final run of a 500 series trainset on the Marunouchi Main Line in March 1995 (altough a few 3-car sets “survived” for a year more on the Hoancho Branch Line).

From the mid-1990s onward, the last batches of 02 Series trains were now delivered with state-of-the-art IGBT-VVVF inverters and AC motors in lieu of the now obsolete chopper control.

In 1998, following the installation of an in-cab signalling ATC system, both the maximium speed on the line (from 65 to 75 Km/h) and the capacity were increased, wich is vital for one of the most important railway lines in Tokyo. In 2007 the line was also converted to “wanman” operation (one-man, conductor-less, driver-only operation) and in 2009 the line and the trains became ATO equipped, allowing a semi-automatic operation.

In 2004, set 50 was repainted in an all-over red liviery idientical to the one carried by the original 300 and 500 series sets. This special liviery was later “vandalized” and trasformed into an advertisment liviery for the Ghana Choccolate company.
Furthemore, similarly to the Ginza Line, in the early 2000s, a Marunouchi Line set was transformed into an “U-Liner” set, a mobile advetrisment for the subway company.

…and a well deserved refurbishment!

Since it’s introduction, the 02 Series did a remarkably good service, but after 20 years, it was in need of a renovation.
The first set being refurbished was No.2 in 2009, and carries on as of today at the pace of 3/4 sets per year. As of today, only a handful of non-refurbished 02 Series trains are in circulation.

The main technical modification carried with the refurbishment was the swapping of the DC motors and GTO Chopper control for PMSM AC motors and IGBT-VVVF control.
The liviery was also modified a bit, replacing the straight white line on the red band with a sine wave design identical to the stainless decoration found on 300 and 500 series sets, wich is a distinctive sign of the Marunouchi Line. Seats cover were also changed, from brown/red to salmon pink, again reminescent of old 300 and 500 series sets.

Intitially the refurbished trains had a plain white red band on the front, but it was later changed by adding two parallel white lines, a decorative design and the lettering “Tokyo Metro”.

On the Branch line too!

As mentioned before, the Marunouchi Line, apart from the mainline (Ogikubo-Ikebukuro via Shinjuku and Tokyo) also has a 4-stations branch from Nakano-Sakaue to Honancho.
The branch was built to access the new Maronouchi Line Nakano depot, wich is located just after Honancho Station.

Unlike the mainline, wich operates in 6-car sets, the Honancho branch line operates in 3-car sets.

To replace the last 500 Series trains in service there, 6 sets of the 02-80 Series were introduced in 1996, replacing the old trains in the same year. The -80 subseries are identical (traction-wise) to later batch “mainline sets”, as such they’re equipped with IGBT-VVVF inverters.

Trivia#1
The Marunouchi line, the first subway line to be inaugurated after the war, was desinged to connect to as much railway stations as possible.
Running in a reversed “C” shape it connects Ikebukuro, Ochanomizu, Tokyo (the only subway line to do so), Shinjuku and Okubo.
It also stops at Otemachi (the biggest interchange of subway lines in Tokyo, with 5 lines meeting there) and Kasumigaseki, located almost below the Diet building and near the Police Headquarters, therefore making it a line used very frequently by Politicians and Government Officials.

Trivia#2
Depsite being newly refurbished, there are already plans to replace the entire 02 series fleet with the new 2000 series. The new trains will enter service by 2020 and are planned to replace the 02 Series by 2022.

Trivia#3
Altough the 50th Anniversary revival liviery lasted for barely a year, it was run both by TRTA and Tokyo Metro, following the company change in 2004.

Trivia#3
There are plans to convert the Honancho branch line to 6-car operation, enabling trough services on the mainline to Ikebukuro. This is one of the reasons why Tokyo Metro is not planning to buy any 3-car set of the 2000 Series.