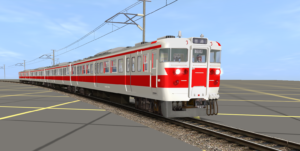 The 113 Series was introduced on the western portion of the Kansai Main Line (present-day Yamatoji Line) in 1973, when the line was electrified from Minatomachi (present-day JR-Namba) to Nara.

Fitted in a red livery with a scheme identical to the 113 Series trains that had been introduced on the Hanwa Line a year earlier, the red 113 Series was intended to be used on newly-introduced rapid services (local services had already been reassigned to the 101 Series), precursors of the present-day JR West’s Yamatoji Rapid Service: starting from Nara, a rapid train arrived at Tennoji, ran a whole circle of the Osaka Loop Line, passed thru Tennoji again and terminated at Minatomachi (and vice-versa for return trips).

When the Nara Line (Nara to Kyoto) was electrified in 1984, the whole red 113 Series fleet was transferred to Nara depot, and expaned it’s services not only to the newly electrified line, but to the Sakurai and Wakayama lines (Oji to Gojo via Takada section only) as well.

When JNR was privatized, in 1987, JR West inherited the red 113 Series fleet, maintaining their distinctive livery; but as the company was already planning an increase in the speed of rapid services, a new train had to be developed.

Introduced in 1989, the 221 Series was JR West’s first own train design, and with a maximium speed of  120Km/h, it was intended to replace the 113 Series on most rapid services, especially on the Kansai Main Line (wich had been recently renamed as the “Yamatoji Line”).

Not casually, the first 221 Series trains entered service with the timetable revision of the 11th of March 1989, running the new “Yamatoji Rapid Service”, a reorganized version of the rapid services that the red 113s had been running since their introduction in 1973.

The 113 Series was replaced on the Yamatoji Line by 1991, and by March 1994, the last ones still running on the Nara and Wakayama Lines were retired too.

Retired 113 Series trains were repainted in different liveries and transferred to other lines, initially on the Fukuchiyama Line, but after the Great Hanshin Earthquake of 1995, most of the fleet was transferred to the JR Kobe Line (the Kobe to Osaka portion of the Sanyo Main Line) to replace the trains damaged by the earthquake.

The red livery of 113 Series trains is commonly known as “Kasuga” red, as the color was inspired by the red columns of the Kasuga-Taisha Shinto Shrine in Nara.

After retirement, a couple of ex-Nara 113 Series sets was briefly used to train drivers and conductors on the (then-) soon-to-open Kansai Airport Line, running services that mimicked the planned Haruka ones.