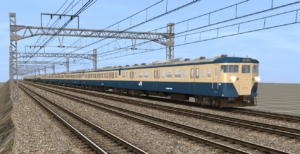 This is a reskin of Keinchiro’s 113 Series upgraded by Hirochi. All the necessary dependencies are included in this package, avaible on the DLS  or from Rizky’s website .

The green cars are a reskin of Kenichiro’s 485 Series upgraded by Hiorchi (for the former limited express train ones) and of the E231-1000 Series (for the double-decker ones) of Rizky_Adiputra, also avaible on his website.

Shortly later, in the late 1960s, JNR was in the midst of a general reorganisation of commuter and suburban services in the Greater Tokyo Metropolitan Area, called the “Five Commuting Directions” campaing, with among other things, planned the connection the Yokosuka and Sobu Lines as a single line via an underground link in order to reduce overcrowding on the two and traffic congestion at Tokyo Station.

In preparation for the opening of the underground link, a new variant of the 113 Series was introduced: the 113-1000 Series.

These were a modified version of the above-ground 113-0 Series in service on the Tokaido Line, as they were designed to run underground, they had to comply with the same stringent regulations already in use on subways, wich mandated, among other things, the complete elimination of all flammable materials and their replacement with ones that were non-flammable, or fire-retardant at best.

When the underground link opened in 1972, 113-1000 Series trains took over all the mainline duties of the 113-0s, wich were “relegated” to suburban, above-ground only duties in the Chiba area.

In 1976, the underground Sobu Line was extended to Shinagawa, alleviating above-ground congestion, and four years later, in 1980, the remaining portion of the Yokosuka Line (between Shinagawa and Ofuna) was quadruple-trakced, finally enabling a long-awaited joint-operation between the Yokosuka and Sobu Lines.

In the 1980s, similarily to the Tokaido Line, JNR introduced green cars on Yokosuka and Sobu Lines rapid services. The two green cars were either of the SaRo 111, 112 or 113 Series (wich were built at the same time as commuter 113 Series cars, and used the same bodyshell), or of the SaRo 110 Series, wich were former limited express (183, 189, 485 Serieses etc.) green cars surplus due to the opening of the Shinkansen.

When JNR was privatized in 1987, the newly-formed JR East inherited the Yokosuka and Sobu Lines fleet, and a few years later it introduced the SaRo 124 green car, both on Tokaido and Yokosuka/Sobu Line services: these were double-decker stainless-steel cars based on those in use on the newer 211 Series, one of JNR’s later designs wich was intended to replace the 113s on the most difficult Tokaido Line services.

Unlike the rest of “passenger-JR” companies, wich had all introduced new commuter and suburban trains immediately after their formation, JR East decided instead to continue the production of the late-JNR-designed trains such as the already mentioned 211 Series and the commuter 205 Series; but by the early 1990s, it was time to develop an entirely new train.

Introduced on the Keihin-Tohoku Line in 1993, the 209 Series was JR East’s first train of it’s “Shin-Keiretsu-Densha”, a family of standard-design stainless steel commuter trains wich followed the concept of “half the weight, half the cost, half the lifespan”. The 209 Series proved to be a remarkable success, and just a year later, development started on a derivative for suburban services.

Introduced in 1994, the E217 Series was intended to replace the 113 Series on the Yokosuka and Sobu Line duties, wich by then, had reached 20 years of age. The E217 Series completely replaced the 113 Series in 1998, with most of the displaced 113 Series trains being reformed into -3 and -4-car sets and moved to above-ground, rural and local lines in the Chiba area and in the Boso peninsula, where they continued to run until the mid-2000s.

JNR’s “five directions commuting campaign” was one of the first “origin->destination” passenger traffic analisys made with the assistance of computers.