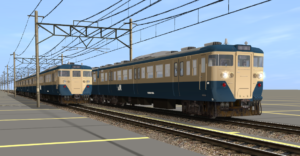 Shortly later, in the late 1960s, JNR was in the midst of a general reorganisation of commuter and suburban services in the Greater Tokyo Metropolitan Area, called the “Five Commuting Directions” campaing, with among other things, planned the connection the Yokosuka and Sobu Lines as a single line via an underground link in order to reduce overcrowding on the two and traffic congestion at Tokyo Station.

In preparation for the opening of the underground link, a new variant of the 113 Series was introduced: the 113-1000 Series.

These were a modified version of the above-ground 113-0 Series in service on the Tokaido Line, as they were designed to run underground, they had to comply with the same stringent regulations already in use on subways, wich mandated, among other things, the complete elimination of all flammable materials and their replacement with ones that were non-flammable, or fire-retardant at best.

When the underground link opened in 1972, 113-1000 Series trains took over all the mainline duties of the 113-0s, wich were “relegated” to suburban, above-ground only duties in the Chiba area.

The transferred 113-0s were reformed in -3 and -4-car sets and entered service on the Narita, Sotobo, Uchibo and the newly-opened Kashima Line, replacing the substandard wartime and post-war built 72 Series, wich was replaced on all four lines by 1976.

From the mid-2000s onwards, the 113 Series were now old and obsolete, and as such, JR East planned a replacement.

Surplus 211 Series trains displaced by E231-1000s on Tokaido Line services were introduced to the Boso area in 2006, replacing the oldest units, but not all of them, as there weren’t enough units.