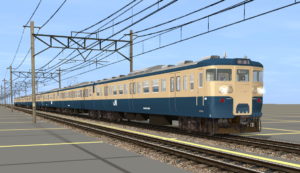 115 Series trains were introduced on the Chuo East Line (the Chuo Main Line portion between Takao and Shojiri) in 1966, to replace the outdated (depsite having been introduced only 16 years earlier) and inadequate 70 Series trains (wich were a derivative of the Tokaido Main Line 80 Series) and to provide new rolling stock for the line’s electrification up to Matsumoto.

These were fitted with the Yokousuka Livery of dark blue and cream, wich was worn by 113 Series trains running on the Yokosuka and Sobu Lines.

Initially used only on local services between Takao and Shojiri (with some services running down to Hachioji or Tachikawa), in 1968 their services were expanded, now covering also the rapid services starting from Tokyo Station, and if the dedicated stock was unavaible, 115 Series were even used for the “Kaiji” and “Kawaguchi” limited expresses (of course, sans the reserved seating surcharge fare).

Production of 115 Series trains never stopped, and in 1975, the last 70 Series trains were retired and transferred on the Kure Line in Hiroshima.

By the late 1970s, 115 Series trains “lost” the rapid services, as they were assigned to brand-new 201 Series trains. They still maintained their status as “reserve” trains for use on limited expresses, a characteristical trait that they maintained for the whole of their career; in fact, they were used in such services until atleast 2012.

With the privatisation of JNR in 1987, the full Chuo East Line 115 Series fleet was inherited by JR East, living a tranquil and mostly unchanged life until the 2010s.

By the early 2010s, the 115 Series trains had been used non-stop since the early 60s, with most sets being atleast 40 years old (and some even nearing 50!). As such a replacement was in order.

At the same time, the E233-3000 Series was already replacing the last remaining Takasaki and Utsunomiya Lines 211-3000 Series, and as these were still quite new (most were less than 20 years old) and cold-resistant, JR East decided to replace the 115 Series with the surplus 211s.

In their later years, the Yokosuka-liveried Toyota-depot trains were also often assisted or substituted by fellow 115s from Nagano-depot (in the light-blue “2nd Nagano Area” livery).

On the 7th of December 2014, the last blue-and-cream 115 Series set made it’s way up on the Yamanashi Prefecture’s mountains for the last time.

The oldest 115 Series trains were scrapped, while the newer ones were transferred to Nagano and Niigata. Finally, one 115 Series set (No. W2) was converted into a “training set” for JR East’s trainee railwaymens.