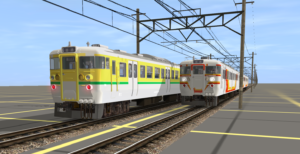 In 1988, after the privatization of JNR, the Yahiko Line 115s were repainted into a new livery of white with vermillion and yellow diagonal bands, wich was inspired by the Yahiko Shrine festival.

In the early 2000s, the “1st Yahiko Livery” was replaced by a simpler one, wich was white and yellow with a green line, wich completely replaced the older one.

…until three years later, when in 2018, two Shin’etsu Main Line 115 Series sets were repainted in both the old and the new Yahiko Line livery!

Both revival livery trains are still operating on the Shin’etsu Main Line and on the Echigo Line, altough their replacement (like the rest of the 115 Series fleet) is imminent.