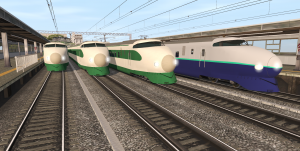 The 200 Series was designed starting from the early 1970s as the first train type for the soon-to-open Tohoku and Joetsu Shinkansen, the first Shinkansen lines to be built north of Tokyo. The design of the 200 Series was based on the older 0 Series for the “warmer” Tokaido and San’yo Shinkansen lines, but it obviously fetaured several modifications for services on the new lines, mainly more powerful traction motors and lighter aluminium bodyshells due to the steep gradients encountered on both lines, as well as snowploughs, improved heat insulations and other mesaures against the copious snowfalls that can be found north of Tokyo.

These fetaures were initially tested on the 961 Series prototype train, built in 1973 and used thruought the 1970s on various test runs along the San’yo Shinkansen, reaching a top speed of 319Km/h, a domestic speed record achieved on the 7th of December 1979. With test results satisfactory, and construction works on the first sections of both new lines coming to completion, JNR placed an order for a first batch of 200 Series trains, with the first sets being built starting from 1980 and delivered later that year. The manufacturers in charge of the construction of the new trains were all very-well established names that had already manufactured the 0 Series: Kawasaki Heavy Industries, Kinki Sharyo, Hitachi, Nippon Sharyo and Tokyu Car Co.

The first 200 Series formation, 12-car set E-1, was completed and delivered to JNR on the 31st of October 1980, being followed by 35 other identical sets (E2 trough E36) over the course of the following two years, with the last one being delivered on the 15th of June 1982.

Finally, on the 23rd of June 1982, the first section of the Tohoku Shinkansen, from Omiya to Morioka, opened for revenue services, with 200 Series sets being introduced on Yamabiko and Aoba services. The Tohoku Shinkansen was followed later that year by the whole Joetsu Shinkansen line, wich opened on the 15th of November, all the way from Omiya to Niigata, with 200 Series trains entering service on this line as well, on Asahi and Toki services.

The fleet of 200 Series trains was evenly split between Niigata and Sendai depots, each recieving eighteen 200 Series “E-formations”.

However, the early “E-formations”, depsite being rather new, still had a comparatively low top speed of 210Km/h, a renmant of the 0 Series shinkansen design (wich had been built when high-speed railway technology was in it’s infancy, and the rather winding Tokaido Shinkansen didn’t allow for higher speeds anyway). To make full use of the relatively straight Tohoku Shinkansen (and some sections of the Joetsu Shinkansen as well, and to provide some trains for the extension of both lines to Omiya down to Ueno station in central Tokyo), JNR decided to order another batch of 200 Series trains modified for higher speeds, these being the “F-formations” adapted for a top speed of 240Km/h. A total of 21 F-formations (F1 trough F21) were delivered between 1983 and 1985 and put in service on selected services on both new lines.

With the privatization of JNR, the whole 200 Series fleet was inherited by the newly-formed JR East on the 1st of April 1987. Around the same time, a general re-organization of all the 200 Series sets began, with nine of the 36 original E-formations being shortened from 12-car to 10-car sets, with the remaining surplus cars being used to form three additional formations with newly-built end cars based on the brand-new Tokaido and San’yo Shinkansen 100 Series style. The resulting “ex-E-formations” were reclassified as “G-formations” and returned to Toki services on the Joetsu Shinkansen. A year later, these nine formations were shortened again, losing yet another two cars to become 8-car sets. Another nine E-formations were likewise shortened to eight cars between 1989 and 1992, re-numbered as G-formtaions and re-assigned to Joetsu Shinkansen Aoba services.

Also around 1992, with the opening of the first “Mini-Shinkansen” line, the Yamagata Shinkansen from Fukushima to Yamagata, the F-formations assigned to the Tohoku Shinkansen were modified with the addition of a retractible coupler behind the nose cone, as the 400 Series trains for the Yamagata Shinkansen were meant to run coupled to a “standard” Tohoku Shinkansen service for most part of the journey, between Ueno and Fukushima. These sets were re-classified as “K-formations”, including as wellthe remaining “E-formations”, wich had to be adapted to the 240Km/h top speed.

The last unmodified “E-formation” was thus retired in 1993, leaving the F, G and K-formations (along with the H-formations) in service on both lines.

The situation of the various 200 Series formations remained mostly unchanged for some years, until the late 1990s: to provide additional capacity on the newly-opened Nagano Shinkansen during the winter olympics (wich were being held in Nagano), Sendai depot 12-car F-formation F80 was modified lent to Nagano depot for about a month. The modifications were all necessary mesaure to cope with the “harsher” Nagano Shinkansen line, including special weight-saving mesaures for the 30permil gradients and the fitting of frequence-converting equipment (unlike the Tohoku and Joetsu Shinkansen lines, wich run only on 25Kv AC with a 50Hz frequency, the Nagano Shinkansen, due to the different frequency used in the eastern and western parts of Japan’s electrical grid, uses the 50Hz between Tokyo and Joetsumyoko station and the 60Hz frequency beyond Joetsumyoko Station). Limited to a 210Km/h top speed, formation F80 remained in service on the Nagano Shinkansen for the whole of February 1998, running additional Asama services interchangeably with the much newer JR-East designed E2 Series.

After the end of the olympics, formation F80 was returned to Sendai depot and “de-modified”, restored to it’s previous state and returned to service on the Tohoku Shinkansen along the other F-formations.

With the introduction of the new, higher-performance E2 Series trains on the Tohoku Shinkansen as well, withdrawals commenced early on for the 200 Series, with the slow 210Km/h G-formations being all retired and scrapped (except one train, converted into an inspection set) between 1997 and March 1998, a little more than 10 years after their introduction.

The remaining unmodified F-formations remained in service, however, they began to be gradually retired in the following years, replaced by more modern serieses, with the last set, F-formation F8 (one of the 100 Series-style trains) being retired in 2007.

JR East had plans to replace the whole 200 Series fleet with the newer, higher-speed E2 Series around the turn of the millennium, but wasn’t able to due to financial constraints – instead, as a stop-gap option, it decided to start an extensive refurbishment program for the whole fleet, wich included a general overhaul of the bodyshell, new rounded cab windows and a new livery, replacing the JNR-era cream and green with a blue and white livery with a light green line.

Most of the K-formations were refurbished, and with the retirement of the last unrefurbished 200 Series set in 2007 (the afromentioned formation F8), the refurbished K-formations became the only 200 Series trains in regular service, a total of eleven 10-car sets assigned to both the Tohoku and Joetsu Shinkansen. In the same year, refurbished formation K47 was repainted into the JNR-era cream and green livery to commemorate the 20th anniversary of the opening of both Shinkansen lines.

However, depsite their recent refurbishment, their comparatively slow speed remained an issue, and their ageing design was ground for replacement. The successor to the 200 Series, the high-tech 320Km/h-capable E5 Series was introduced in the late 2000s, with the first set delivered to Sendai depot in 2010 and entering service on the Tohoku Shinkansen on the 5th of March 2011.

The deliveries of the E5 Series sets were swift, and in just a couple years, the 200 Series fleet had considerably thinned, being completely replaced on the Tohoku Shinkansen on the 19th of November 2011, with the remaining eleven K-formations being transferred to services on the slower Joetsu Shinkansen. However, these quickly started to be replaced here as well by E2 Series sets also transferred from the Tohoku Shinkansen.

Three other cars (two cab cars and an intermediate one) from set E15 (later F37) were put on display at Kaminoyama-onsen station on the Hakodate Main Line (in Hokkaido out of all places!), but have unfortunately been removed and scrapped in 2013.