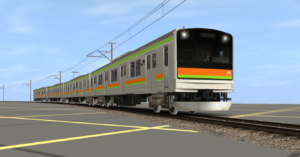 This is a reskin of the Tsurumi Line 205-1200 Series made by Rizky_Adiputra.
All the necessary dependencies are included in this package, avaible on the DLS or from Rizky’s website
Reskinned with permission.

The 205-3000s were modified with semi-automatic, passenger-operated doors, and were retrofitted with a wheelchair-accessible toilet.

Starting from early 2018, the influx of E231-3000 and 209-3500 Series sets converted from displaced former Chuo-Sobu Line stock, led to the replacement of most of the two lines’ rolling stock, including the 205-3000s, wich were replaced in July 2018 and subsequently scrapped.