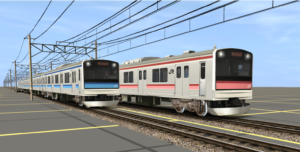 Standard 205-3100 Series on the left, “Multi-Color”, “convertible-seating” formation M4 on the right.

This is a reskin of the Tsurumi Line 205-1200 Series made by Rizky_Adiputra.
All the necessary dependencies are included in this package, avaible on the DLS or from Rizky’s website
Reskinned with permission.

To replace the 103 Series fleet (wich they too were former Tokyo area trains) still in use on Senseki Line services in Miyagi (Sendai) Prefecture, in the early ‘2000s, JR East decided to introduce converted 205 Series trains, identical to the ones already being made for several minor lines in Tokyo.

Classified 205-3100 Series, a total of nineteen 4-car sets (a total of 76 cars) were converted from former Yamanote and Saikyo Lines cars. The main modifications included changes in the driving desk and horn (wich were both changed to E231-type ones), the addition of a wheelchair-accessible toilet, and the conversion of the door to the semi-automatic, passenger-operated type.

They also recieved a few minor modifications to cope with the harsh cold of Tohoku winters.

A single set, No.M4, was also equipped with “convertible” (longitudinal to transversal and viceversa) seating. This particular set was fitted in a peculiar livery, with each of the four cars having it’s own color.

Originally equipped with the standard ATS-P, the whole 205-3100 Series was retrofitted with recievers for the ATACS moving block signalling system, wich was to be tested on sections of the Senseki Line before it’s intended widespread adoption on Tokyo Area commuter lines.

ATACS tests began in 2011, but they were suddently interrupted by the Great Tohoku Earthquake and Tsunami of March 2011.

The Senseki Line came out as one of the most damaged lines from the earthquake, with the section between Rikuzen-Ono and Rikuzen-Otsuka (about five kilometers with two intermediate stations, Tona and Nobiru) being completely washed away by the Tsunami.

After the line’s reconstruction was complete, 205-3100 Series trains returned to run alongside the coast of the Pacific Ocean.

At present there are no plans to replace 205-3100 Series trains on Senseki Line duties.