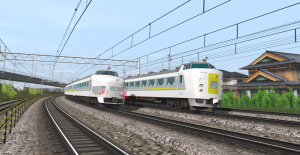 485 Series trains were introduced on Hitachi limited express services in 1972, running between Ueno station in Tokyo and Sendai. Depsite the relatively “young” age of the trains, by the late 1980s, the then-newly-privatized JR East was already seeking a replacement for the 485s, mainly to improve it’s image. Designated as the 651 Series, JR East’s first new AC/DC multivoltage limited express train entered service on the 11th of March 1989.

Due to their novelty, 651 Series trains were exclusively assigned to dedicated, faster “Super Hitachi” services, while the “regular” Hitachi services were still run by 485s, all in their traditional, but old-fashioned JNR red-and-cream livery. To further improve it’s image, JR East decided to repaint the 485 Series in a “more modern” livery: a base of white with grey window bands and yellowish-green decorations.

Trivia:
The “Hitachi” name for limited express services was restored in 2015, when “Super Hitachi” services  (now operated exclusively by E657 Series sets) were extended southwards, from Ueno to Shinagawa station (via the newly-built Ueno-Tokyo Line) and renamed simply “Hitachi”.

*To be clear, in this case “Hitachi” does not refer to the industrial conglomerate (wich did participate in the construction of the 485 Series, among other things), but rather to the ancient “Hitachi” province, wich was named after the (still existing, of course) city of Hitachi, after wich the company was also named (having been established there in 1908).