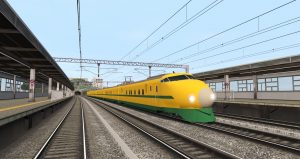 All the necessary dependencies are either included in this .rar or are avaible on the DLS.

With the opening of the new Shinkansen lines northwards of Tokyo, the Tohoku Shinkansen to Morioka and the Joetsu Shinkansen to Niigata, dedicated inspection trains were obviously needed, with these delicate and important duties being assigned to two special sets, classified as the 925 Series.
The first of these sets, S1 (or officially the “925 Series 0-subseries”) was one of the former 200 Series prototypes that were built in the late 1970s in preparation for the start of the mass-production of the actual trains. Set S1 specifically had been manufactured in 1979 by three manufacturers: the first two cars had been built by Nippon Sharyo, the central two by Kinki Sharyo and the last two by Kawasaki Heavy Industries. Converted into an inspection train shortly before the official opening of the Tohoku and Joetsu Shinkansen, set S1 entered service togheter with the “revenue” 200 Series sets, running regular inspection runs on both new lines, with the Nagano Shinkansen added to them starting from 1997, for wich set S1 had to be adapted, in a way similar to what was being done at the same time on 200 Series set F80: fitting of multi-frequence (50 or 60Hz) equipment, more powerful traction motors to cope with the line’s steep incline and other modifications.

The other set, S2 (or the “925 Series 10-subseries”) originally started out as the 962 Series, an even earlier 200 Series prototype built in 1978 that served as the definitive “blueprint” for the full-production trains. The 962 Series ran several test runs on the Tohoku Shinkansen up until 1980, when the actual full-production 200 Series trains became available for testing, and was thus sidelined and stored inside Sendai depot until 1983, when it was “dug up”, converted into an additional inspection train and re-introducted in service, as JNR felt that just one single inspection train wouldn’t have been enough for both the Joetsu and Tohoku Shinkansen lines.

However, depsite their different lineages, both sets were essentially identical and interchangeable, being fitted with the same inspection equipment as the “more famous” 922 Series – the original “Doctor Yellow” of the Tokaido and San’yo Shinkansen.

Both sets were inherited by JR East upon the privatization of JNR in 1987, and carried on being used interchangeably on inspection runs on both lines until the early 2000s – with their bodyshells suffering from precocious wear and tear and their largely outdated testing equipment no longer meeting current standards, JR East decided for a replacement. This replacement came in 2001 in the form of the E926 Series “East-i” set, a dedicated inspection train based on the E3 Series “mini-shinkansen”, thus enabling it to run seamlessly on the whole of JR East’s Shinkansen network, including the Yamagata and Akita mini-shinkansen lines, something that wasn’t possible with the two 925 Series sets as they both were full-sized Shinkansen trains and thus couldn’t fit trough the “conventional-lines-sized” infrastructure on both Mini-Shinkansen lines.

The first to be withdrawn was set S1, wich was removed from the roster and scrapped in 2001. Set S2 didn’t last much longer either, being retired on the 25th of January 2003 and subsequently scrapped as well, thus unfortunately leaving no surviving “Tohoku Doctor Yellow” cars preserved (or preservable) for posterity.