Part of the ACS-64 Pack requested by Mr.Kitten via the TRSR form – jump to the next part. 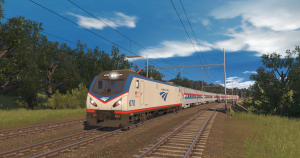 The ACS-64 was introduced by Amtrak in 2014 as a replacement both for the severely unreliable HHP-8 and relatively ageing AEM-7 electric locomotives on Northeast Corridor electrified services. Continuing somewheat of a tradition that had yielded particularily good results over the years, Amtrak looked to european manufacturers for it’s new electric locomotive. The choice fell on Siemens, wich proposed a model based on it’s successful EuroSprinter type, with a few cues from the newer Vectron type as well.

Classified as “ACS-64s”, where “ACS” stands for Amtrak Cities Sprinters, Siemens’ designation of the type, and 64 refers to the 6400 metric Kilowatts of power (a rare instance of metric system usage – equals 8600 horsepower in the imperial system), Amtrak placed an order for the first 70 locomotives (to be numbered 600 to 670*) in October 2010. Obviously, to comply with the stringent FRA crash-worthiness regulations, the EuroSprinter type had to be considerably redesigned, particularily in the front.

To operate on the various voltages and frequencies of the NEC, the ACS-64s were built to be effectively tri-voltage locomotives, able to operate on 12Kv at 25Hz on the ex-PRR portion of the NEC, between New York and Washington DC, and the Keystone Corridor between Philadelphia and Harrisburg, on 12.5Kv at 60Hz on the ex-New Haven Railroad between New York and New Hartford and on 25Kv at 60Hz on the relatively-recently electrified (2000) New Hartford to Boston section.

As their classification implies, ACS-64s are rated for a maximium power output of 8600hp, wich enables them to easily haul a train formed of eighteen Amfleet-type coaches at a maximium speed of 125mph (201Km/h).

To comply with the “Buy America Act” (a law provision that specifies that purchasing equipment manufactured in the United States is mandatory for any transit agency wishing to recieve federal funding, something the latter almost always can’t avoid) components for the ACS-64s were built in several different US states (for example, traction inverters and electrical equipment was manufactured at Alpharetta and Norcross, both in Georgia and traction motors and gearing were manufactured in Norwood, Ohio) and then shipped to Siemen’s Florin, California plant for final assembly.

The first three ACS-64s were completed in early 2013 – two of them (600 and 601) were immediately shipped to USDOT’s Transportation Technology Centre in Pueblo, Colorado for dynamic testing, and unit 602 was shipped to the NEC for clearance testing.

Unit 600 became the first ACS-64 electric locomotive in revenue service on the 7th of February 2014, hauling the No.171 Northeast Regional train from Boston to Washington D.C.

Delivery and entrance in service of the other 69 ordered units continued smoothly thruought the years, replacing both the HHP-8s (the last of wich was retired almost immediately, on the 7th of November 2014, and put in storage with the other 14 units) and AEM-7s, with the last two (units 942 and 946) of these long-standing icons of the NEC being retired on the 18th of June 2016, following the delivery, two weeks earlier of the 70th and last unit of the ACS-64 order from Siemens.

Depsite having just begun, a few notable incidents have already involved ACS-64s: unit 601 was involved in the May 2015 Norhteast Regional Palmetto derailment (caused by eccessive speeding trough a curve, something that would’ve been easily preventable if the line would’ve been fitted with any kind of ATP system, such as Amtrak’s ACSES) and unit 627 hit a backoe excavator and subsequently derailed. Both have been rebuilt and returned to service.

Currently, all 70 units are in service, having become the backbone of Amtrak’s Northeast Corridor electrified services (togheter with the Acela Express trainsets), and are a common sight along the entirety of the NEC, from Boston to Washington D.C.

ACS-64s have proven themselves true reliable worhorses, a worty replacement for the AEM-7s, and will surely be a familiar sight on the North-East Corridor for many more decades.

Probably one of the most famous pictures involving the ACS-64s, here’s then-Vice-President (and current President) Joe Biden seated in the cab of ACS-64 unit 600 at a press release at Philadelphia’s 30th Street Station on the 6th of February 2016. 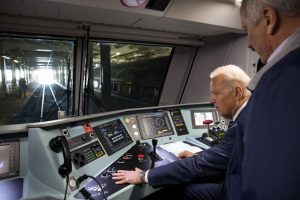